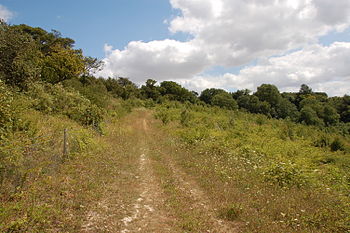 The North Downs Way near Hollingbourne

The North Downs Way National Trail is a long-distance path in southern Kent and Surrey, 153 miles long, following the ridge of the North Downs from Farnham in Surrey to Dover in Kent, or vice versa.

The pathway is mixed-category in that it varies throughout length from footpath (around 48%) status to bridleway, byway and road. Some 19% of the Way follows roads, though 75% of those are minor lanes.

The highest point of the way is Botley Hill in Surrey, which as 853 feet is the highest hill of the North Downs.

The trail runs from Farnham in Surrey to Dover in Kent, or vice versa, passing Guildford, Dorking, Merstham, Otford and Rochester. It runs through thwo designated 'Areas of Outstanding Natural Beauty'; the Surrey Hills AONB and the Kent Downs AONB.

East of Boughton Lees, the path splits in two, the northern section running by way of Canterbury and the southern via Wye; at this stage the path crosses the Stour Valley Walk and passes the Wye Crown. The two sections of the path reunite at Dover. The northern route is 131.1 miles (211.0 km) long, and the southern route 125 miles. The current length of the whole North Downs Way is 153 miles.

The path (east of Boughton Lees, the southern section) runs along the ridge of the North Downs hills, and follows parts of the Pilgrims' Way.

As the pathway runs through the downland, the trails and surrounding countryside are characterised by chalk-based soil and calcareous grassland with broadleaf woodland on the upper slopes and livestock grazing on the lower slopes and clay soil and crop agriculture predominant in the valleys.

The official opening was in 1978. Planning for a new 'Long Distance Path', as they were classified in 1949, began in Kent in 1950. After an extensive survey, it was agreed that a route along the ridge of the North Downs provided the most scenic walk, rather than following the Pilgrim's Way, which even in the 1960s was predominantly metalled road.

The North Downs Way was officially designated by the Minister in 1969, and opened in parts shortly afterwards, becoming fully open in 1978. At that time, it was 141 miles in length, 36 miles of which were newly created Public Rights of Way.