Settle is a small market town in the West Riding of Yorkshire, high in the Pennines. The town is ancient but its name today is famous for the railway, for here begins the dramatic Settle-Carlisle railway line 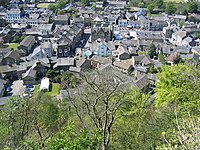 Settle is in Ribblesdale, at the southern edge of the Yorkshire Dales, within a few miles of the Three Peaks. Immediately overlooking the town is Castlebergh, a 300-foot limestone crag, and to the east is Malham. The River Ribble provided power for Settle's former cotton mills, and is now being harnessed by Settle Hydro, a micro hydroelectric scheme, to provide just 50 kW of power to the National Grid.

Settle railway station is near the town centre, and Giggleswick station a mile away. The main road through Settle is the B6480, which links to the A65, connecting Settle to Skipton and Kendal. The town has a population of 2,421 according to the 2001.

Settle is thought to be an early Anglo-Saxon settlement; its name is just Old English for "settlement".

In the Domesday Book of 1086 is states that before the Norman Conquest the land was held by a lord named Bo, but after the Harrying of the North (1069 - 1071) the land was granted to Roger de Poitou.

In 1249 a market charter was granted to Henry de Percy, 7th Baron Percy by Henry III. A market square developed and the main route through the mediæval town was aligned on an east-west direction, from Albert Hill, Victoria Street, High Street and Cheapside and on through Kirkgate. This road led to Giggleswick where the citizens attended the parish church. The first bridge over the River Ribble was mentioned in 1498.

During the Civil War, the Cliffords, the lords of the manor were Royalists, but their subjects were not. John Lambert of Calton in Malhamdale, was a general in Cromwell's army and his troops camped at Settle in August 1651 while on the road to an encounter in Lancaster.

Daniel Defoe wrote "Settle is the capital of an isolated little kingdom of its own surrounded by barren hills."[1]:p.163 Because of its remoteness Settle saw mostly local commerce.[2] The old roads were pack horse trails[1]:p.105 and Drovers' roads along hilltops[3]:p.6 because the valley was soft and swampy before field drainage and the dredging of stream estuaries.[1]:p.105

In the 1700s textile industrialists supported by traders and landowners campaigned for a turnpike to connect with growing industrial towns. The minute book for the Keighley and Kendal Turnpike Trust shows that most investors were mill owners from the Giggleswick district.[4] In 1827 the trust, having miscalculated the cost of road maintenance, was in debt by £34,000.[1]:p.172 When in 1877 the trust was terminated, the investors received on average 54% of their deposit. The investors had benefitted in that Settle was now well connected and its cotton mills boomed. The mill owners imported coal and, like the heavy industries that exported agricultural lime and sandstone masonry, welcomed the turnpike for access via carrier waggons to the Leeds and Liverpool Canal at Gargrave. The first passenger stagecoach arrived in 1763. The Mail Coach was running regularly in 1786. The Union coach for passengers ran each way on alternate days in the early 1800s, and daily by 1840.[3]:p.5

The "little" North Western Railway reached Giggleswick in 1847 and in 1849 the railway company built Station Road from Giggleswick to Settle. In 1875 the Settle to Carlisle Railway was built, opening to goods traffic in 1875 and to passengers the following year when Settle Station opened along with a goods warehouse, cattle pens, signal box and water cranes.[5] The tale of this great enterprise cannot shortly be told, and whole books have been written about it; a railway they had to build "on stilts" to cross the fells to Cumberland.

In the late 18th century cotton spinning became the town's main employment. Bridge End Mill was converted from corn milling to cotton spinning. John Procter operated mills at Runley and King's Mill which were taken over by his son Thomas. He built the row of workers' cottages, Procter's Row in Lower Kirkgate. In 1835, Dog Kennel Mill and Brennand's Weaving Shed, Settle had five mills employing 333 people.[6]

Settle's market is held weekly on Tuesdays in Victoria Hall in the town centre.[7] Settle Town Hall was sold by Craven District Council to a developer[8] The Square is surrounded by local businesses, most of which are family-owned, with some offering items for sale unique to the Settle area. The Naked Man is believed to be the oldest cafe in the country.[9]

The Folly[10] is a 17th-century Grade I listed building on the main street. In 1996 the North Craven Building Preservation Trust[11] purchased part of The Folly, restored it and opened it to the public in 2001. The Folly houses the Museum of North Craven Life and hosts exhibitions during the open season. There are permanent displays, including the Settle to Carlisle Railway, Robert (Mouseman) Thompson furniture, and local history. The rest of building has been purchased by the trust. The museum is independent and run by volunteers.

The Gallery on the Green[12] is thought to be the smallest art gallery in the world: drawings, paintings, photographs and other works are housed in a former BT telephone kiosk. Gavagan Arts at Linton Court Gallery[13] is situated in a courtyard off Duke Street. The gallery presents a series of temporary exhibitions of modern and contemporary art.

The district has several caves where prehistoric remains have been found, the most notable being Victoria Cave, so called because the inner chamber was discovered in 1837 on the day of Queen Victoria's accession. Victoria Cave contained remains of mammoth, bear, reindeer and hippopotamus; a harpoon head carved from antler; flint implements, and other ornaments. The discovery of flint is noteworthy as it is not found naturally in the area. Craven Museum & Gallery[14] in Skipton has an exhibition of items which includes a bear's skull found in one of the caves.

The composer Edward Elgar visited Settle on many occasions to visit his friend Dr Charles William Buck. There is a blue plaque at Cravendale to commemorate this.[15]