Bingley is a busy market town in the West Riding of Yorkshire, in the Skyrack Wapentake. It stands on the River Aire and also on the Leeds and Liverpool Canal.

It is a modest town, a coaching stop in the early Modern Period and industrialised in the Industrial Revolution, and a good deal of heritage of those ages remains; coaching inns beside industrial chimneys and factories and the churches and chapels which sprang up in ther nineteenth century. The Five Locks on the canal are of interest. Industrially, Bingley was a textile town.

Bingley appears in the Domesday Book of 1086 as "Bingheleia".

Bingley was probably founded in the Anglo-Saxon period and its name is of Old English origin. Bingley was founded by a ford on the River Aire. This crossing gave access to Harden, Cullingworth and Wilsden on the south side of the river.

In the Domesday Book of 1086, Bingley is listed as "Bingheleia", with the following entry:

Bingley's entry in the Domesday Book

In Bingheleia, Gospatric has a manor of four carucate of land to be taxed, land for two ploughs. Ernegis de Burun has it and it is waste. In the time of King Edward the Confessor it was valued at four pounds. Woodland pasture two leagues long and one broad. All the manor is four long and two broad.

The ford was superseded by Ireland Bridge. Bingley was a manor which extended several miles up and down the Aire valley, extending upstream to Marley on the outskirts of Keighley and downstream to Cottingley. Bingley became a market town with the grant of a Market Charter in 1212 by King John.

According to the poll tax returns of 1379, Bingley had 130 households, probably around 500 people. The nearby towns of Bradford, Leeds and Halifax had about half this population. At this time Bingley was the largest town in the area.

In 1592 Bingley was shown on a map by Yorkshire map-maker Christopher Saxton as a single street with about 20 houses on each side. The church sits at the west end of the street opposite a single large house, possibly a manor house. Since Bingley was a market town, the market stalls would have been set up on either side of the main street. One of the oldest buildings in Bingley is a coaching inn, the Old White Horse Inn, situated on the flatter north bank of the River Aire by Ireland Bridge. 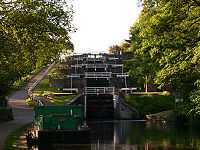 Like many towns in the West Riding, Bingley prospered during the Industrial Revolution. The Bingley section of the Leeds and Liverpool Canal was completed in 1774, linking the town with Skipton, and Bradford by way of the Bradford Canal. The canal passes through the town centre and ascends the side of the valley by the Bingley Five Rise and Bingley Three Rise Locks. Several woollen mills were built and people migrated from the surrounding countryside to work in the them. Many came from further afield such as Ireland in the wake of the Irish Potato Famine (1845-1849). A railway and line goods yard were built, bringing further trade. During this period the villages of Gilstead and Eldwick became conurbated with Bingley. The Bingley Building Society was founded in this period. 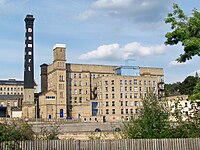 Bingley Teacher Training College opened in 1911 with Helen Wodehouse as principal. The first intake of students was 102 women from in and around the then West Riding of Yorkshire. Over the years until its closure in 1979 the college produced approximately 16,000 teachers.

The Beeching Axe demolished the goods yard, though the station which recently celebrated its centenary, still serves trains to Leeds, Bradford, Skipton, Morecambe and Carlisle. The textile mills have largely been closed. The Damart mill still stands and trades in textiles. Since 1995 the tannery, Bingley Mill & Andertons have been converted into flats. The most cramped and outdated terraced housing (in the opinion of the council) was partly replaced with council housing, Bingley Arts Centre and the headquarters of the Bradford & Bingley Building Society. Further council housing was built up the hill towards Gilstead including three tower blocks. Much of the council estate was sold under the "Right to Buy" from the 1980s and a substantial portion has been knocked down and rebuilt as private housing. 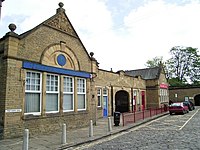 The A650 trunk road passes through Bingley. Through traffic has been diverted onto the new dual carriageway avoiding the town centre. The road passes northwest to Keighley and southeast to Shipley and Bradford.

The Airedale Line, part of the "Metro" railway network passes through Bingley. Bingley railway station still has many historical features.

The Leeds and Liverpool Canal passes through Bingley. There are several flights of locks in the Bingley section, the famous Five Rise Locks, the smaller Three Rise Locks and a further two lock flight at Dowley Gap. The canal climbs steeply up the side of the Aire valley through this section.