The Cotswold Way passing the site of the Battle of Lansdowne

The Cotswold Way is a long-distance footpath of 102 miles, running along the Cotswold Edge escarpment of the Cotswold Hills through Somerset and Gloucestershire and a short stretch in Worcestershire. It was officially inaugurated as a National Trail on 24 May 2007 and several new rights of way have been created as a result.[1]

The trailheads are at Bath in Somerset and Chipping Campden in Gloucestershire.

The Cotswold Way route was first suggested some 50 years ago by Gloucestershire-area Ramblers. Although recognised as a suitable route for a National Trail in due course, the path was initially sponsored by the local council, who had no powers of footpath creation, and so used only existing rights of way.

An early guide to the Way, in the hand-drawn pictorial style of Alfred Wainwright, was produced by a Cheltenham-area rambler, Mark Richards, in 1973. The foreword from Tony Drake says:

"... it is necessary to trace the history of the project to date. Following the passing of the National Parks and Access to the Countryside Act of 1949, which made provision for the designation and creation of long distance paths, I put forward the idea of a footpath route following the Cotswold escarpment. This met with great interest but the plans which the Gloucestershire Committee of the Ramblers Association submitted to the National Parks Commission in 1953, though acknowledged and mentioned in the Commission's annual report of that year, was nevertheless pigeonholed and largely forgotten until Gloucestershire County Council prepared its recreational plan for the countryside in 1968. The County Council decided to designate a Cotswold Way route itself, using existing public rights of way, and the scheme was launched during Footpath Week in May 1970. The Way has had priority in signposting and waymarking programmes but until the Countryside Commission get ministerial approval to create a national route, grants will not be available for maintenance and several very desirable rights of way, where none now exist are unlikely to be created."

As it closely follows the scarp of the Cotswold Edge, the Cotswold Way usually affords views, mainly to the north and west—starting in the south with the Severn Estuary and Severn bridges, the meanders of the River Severn above Sharpness, the Forest of Dean, the hills of Monmouthshire and the Black Mountains to the west. The distinctive shape of May Hill is visible for much of the route, as is the long spine of the Malvern Hills. Gloucester Cathedral can be seen from the path.

Further north on the path, above Cheltenham, there are old quarries containing rock features such as the Devil's Chimney at Leckhampton.

After Cleeve Hill the escarpment starts to turn to the east, giving views across the Vale of Evesham. The classic Cotswold villages of Stanton and Stanway are visited, then Broadway village, before the final steep ascent to Broadway Tower and the scenic descent to Chipping Campden.

On a clear day, the Clee Hills near Ludlow can be seen, 60 miles to the northwest.

On its 102-mile journey from Bath, the trail passes through or near to several famous towns and villages, amongst them Old Sodbury, near Chipping Sodbury, Wotton-under-Edge, Dursley, Stroud, Painswick, Cranham, Leckhampton, Cheltenham, Winchcombe, Stanway and Broadway.

It passes numerous places of interest, including the site of the Battle of Lansdowne, the Somerset Monument, the Tyndale Monument, Sudeley Castle, Cleeve Hill, Hailes Abbey, and the Broadway Tower. With the exception of a small stretch around Broadway (which is in Worcestershire), the entire walk is within Gloucestershire and Somerset.

Besides being popular with walkers, the Cotswold Way is run annually as a 10-stage relay (the Cotswold Way Relay) from north to south, usually in late June or early July. The winning team typically takes an aggregate time of about 12 hours. It is run under Fell Runners' Association rules and organised by City of Bath Athletic Club.[2] It is traditional for the first leg to start from St James Church, Chipping Campden promptly at 7am. The lead runners finish the final leg outside the doors of Bath Abbey at about 6pm.

The official record for running the Costwold Way is held by Darryl Carter of Teddington, Middlesex who on 22 July 2012 ran from Bath to Chipping Campden in 20 hours and 36 minutes.[3]

Route and points of interest 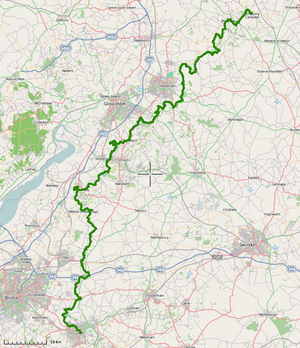 The route of the Cotswold Way