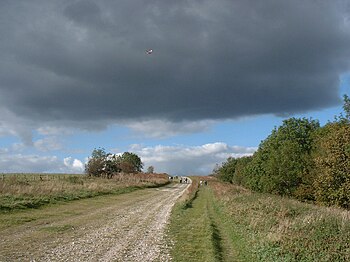 On the South Downs Way, near Chanctonbury Ring

The South Downs Way is a long distance footpath and bridleway running along the South Downs in Sussex and Hampshire. It is designated a 'National Trail'.

The paths and tracks that have been linked to form the South Downs Way have been in use for approximately 8,000 years, since Mesolithic man took to the hill ridges away from the forest and swamp of that age. The signs of early inhabitants are visible across the Downs, including Bronze Age and Iron Age tumuli, and Iron Age hill forts. Old Winchester Hill is an example of one of these hill forts along the path.[2]

The Romans no doubt trod the hills in their day too and Bignor Roman Villa stands by the path,[3] near Bury. 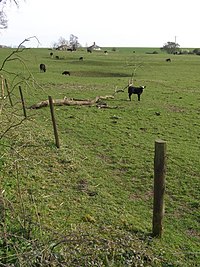 The site of Lomer, the lost village

Of Mediæval historical interest is the village of Lomer, now only visible as a few small bumps in the ground. It was most likely abandoned during the plague in the 14th century.

The flat plain to the north of the South Downs Way, where it passes Lewes, is the site of the famous Battle of Lewes fought by Simon de Montfort, 6th Earl of Leicester and Henry III during the Second Barons' War.

From the Tudor era, Ditchling Beacon is named for its use as a beacon hill to warn of invasion. It used to warn Queen Elizabeth I of the Spanish Armada lumbering east along the English Channel.

One particular oddity, the Long Man of Wilmington can be found only a few metres off the path and down the hill as the path nears one end in Eastbourne. It is by tradition considered an ancient hill figure and symbolic of Sussex, though recent study has shown that it was most likely created in the sixteenth or seventeenth centuries AD, possibly posing more questions than it answers regarding its meaning.[4] Nevetheless, it still attracts its fair share of Neo-Druidism and other Neo-Pagan interest and their odd rituals.

At Rodmell on the trail, Virginia Woolf drowned herself in the River Ouse in 1941.

During the Second World War much of the south coast of Britain was fortified with pillboxes, tank obstacles and machine gun posts in anticipation of a German invasion. These objects can be seen closer to the sea and require a diversion. The closest and probably best site is Newhaven Fort, a five-mile diversion from the path, which is an attraction that houses many Second World War artefacts and documents with impressive examples of the huge cannons used in coastal defence.[5]

Starting from the west, the path runs an undulating course from Winchester in Hampshire. It continues past Cheesefoot Head, the towns of Petersfield and across into Susex.

The path passes Arundel, the villages of Storrington and Steyning, Devil's Dyke viewpoint near Brighton, followed by Ditchling Beacon and miles of chalk downland across to Beachy Head, and finally ending in Eastbourne.

The path can be walked at a leisurely pace in about a week while a good walker, horse rider or cyclist would take two or three days. It is closed to motorised traffic along the route and this rule is generally observed.

Several youth hostels are placed along the route to accommodate walkers. It also passes Birling Gap, a beach area with hotel and restaurant, and a fine opportunity to swim, despite the pebble beach.

Sights along the trail

Much of the South Downs Way is on high chalk downland and the views are always interesting. Perhaps the most dramatic vistas are on the high chalk cliffs on the Seven Sisters, Sussex towards Beachy Head and before the descent to Eastbourne. However, there are also superb views in clear weather from the ridgeway sections on the tops of the downs, especially on Ditchling Beacon.

The Way lies within the South Downs National Park. There is plenty of historic interest along the way, such as the Long Man of Wilmington near Eastbourne.

Diversions are needed to visit Brighton or Lewes, the latter town being of great beauty with an historic centre. Without exception it is a very well maintained and signposted route. While it crosses various villages for provisions much of it is surprisingly isolated and quiet considering the density of the population in south-east England.

Various events are held along the route, including: