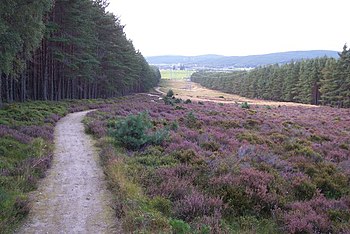 The Speyside Way in the Abernethy Forest

The Speyside Way is a long distance walking route that follows the River Spey through some of the most beautiful scenery of Banffshire, Morayshire and Inverness-shire. It is one of four designated 'Long Distance Routes' in Scotland.

The trail begins in Aviemore (in the mountains in the detached part of Morayshire) and ends at Buckpool harbour in Buckie in Banffshire, some 65 miles away. Some choose to walk the route from Buckie to Aviemore and others from Aviemore down to Buckie. There is a spur leading off the main route to Tomintoul bringing the total distance up to 80 miles. In addition, there is a Dufftown loop option, and other less well-known routes (Badenoch Way, Dava Way, and Moray Coast Trail) can be worked in, all affecting the total distance walked. Sections of the route are open to cycling.

The path is given official alternative names: in Scots the Strathspey Way and in Gaelic Slighe Shrath Spe.

The route and proposed extensions

The Way is clearly marked with a symbol showing a thistle in a hexagon. The route generally follows the valley of the River Spey, passing some of the distilleries that produce Speyside single malts. The final five miles from Spey Bay to Buckie follow the coastline.

The path follows most of the route of the former Strathspey Railway.

An extension of the route from Aviemore to Newtonmore is currently being progressed. This extension would lengthen the total route by 22 miles, roughly following the route of the River Spey and utilising part of the Sustrans National Cycle Network.