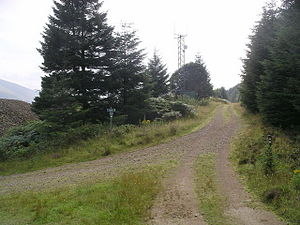 The Great Glen Way on forest tracks near Loch Laggan 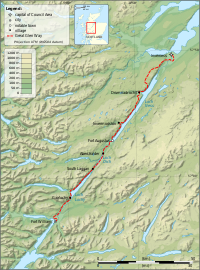 Map of the Great Glen Way

The Great Glen Way is a long distance path in Inverness-shire following the Great Glen. It runs from Fort William in the southwest to Inverness in the northeast, covering 79 miles. The trail was opened in 2002.

The Great Glen Way is generally walked from southwest to northeast to follow the direction of the prevailing wind. It can be walked in 5–6 days, or cycled in 2–3 days. For an exceptional challenge, the Great Glen Way can be added to the West Highland Way, whose northern trailhead is at Fort William.

Beginning at the Old Fort in Fort William, the Great Glen Way skirts the shores of Loch Linnhe to Corpach, and the Caledonian Canal. The eight locks of Neptune's Staircase takes the canal to 63 feet above sea level.

The route passes various canal features until Loch Lochy whence forest tracks take it along the western shore before rejoining the canal at Laggan Locks. A detour to bag a couple of Munros is an option here, but it is likely to take the best part of the day.

From Laggan Locks the route follows the towpath through Laggan Avenue to the Laggan Swing Bridge. Crossing the A82 road it then runs along the eastern shores of Loch Oich, partly following the route of the dismantled Invergarry and Fort Augustus Railway. It joins back on to the canal towpath at Aberchalder, for the next section into Fort Augustus. An alternative route known as the "Invergarry Link" runs along the western side of Loch Oich, providing access to accommodation and shops in Invergarry.

From Fort Augustus the route climbs away from the canal and up into the forest above Loch Ness. There are views from the high level forest track which eventually drops into Invermoriston and out by a steep climb. High level forest track leads into the hamlet of Grotaig then alongside the road until a path heads down through Clunebeg Wood to the banks of the River Coiltie and Borlum Bridge to Drumnadrochit

From the village, Drumnadrochit, the Great Glen Way climbs a steep hill to Abriachan. It then ascends a forest track giving good views traversing through the forest. Leaving the road at Blackfold, the waymarking indicates forest track at Craig Leach Forest which eventually emerges at a reservoir. The route runs downhill through the suburbs of Inverness, then follows the canal and the River Ness to the city centre, finishing at Inverness Castle.

The legth of the Great Glen Way was first swum by Marathon swimmer Alina Warren,[1] who completed the 73 miles in July 2012.[2] The swim used all three lochs, and river Ness, river Oich and the river Lochy instead of the canals.