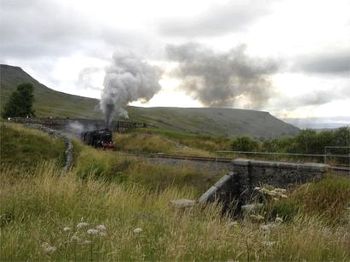 Mallerstang is a steep-side valley (and civil parish) in the east of Westmorland, in the Pennines, close to the border with the West Riding of Yorkshire.

The dale is at the head of the upper Eden Valley.[1] It is six miles south of the nearest town, Kirkby Stephen in southern Westmorland. The eastern edge of the parish, at Aisgill, borders Yorkshire and the Yorkshire Dales National Park.

The head of the Eden 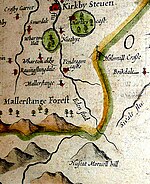 This narrow valley at the head of the River Eden is bounded by the bulk of Wild Boar Fell and Swarth Fell to the west and Mallerstang Edge to the east.

The highest point of Mallerstang Edge is the summit of High Seat on the county border and on the main east-west watershed of the Pennines; at 2,326 feet this is just three feet higher than the more prominent Wild Boar Fell. The other main high points on the eastern side of the dale are the curiously named Gregory Chapel, south of High Seat, and Hugh Seat to the south-east.

The river Eden rises as Red Gill Beck in Black Moss, the peat bogs below Hugh Seat. A little further downstream it becomes Hellgill Beck; and it traditionally takes the name 'Eden' below the waterfall Hell Gill Force, after it has been joined by Aisgill Beck, which flows down from Wild Boar Fell. The Ordnance Survey places the name change further upstream, beyond the diffluence of the Eden Sike which flows into Eden Sike Cave, one of a number of caves in the area.

Mallerstang, like many other Pennine dales, reflects the pattern set a thousand years ago by its Norse settlers (whose language is still evident in the names of many of its geographical features).[2] Its small community is scattered along the six miles of the dale in a series of isolated houses and small hamlets, with no village. The largest of the hamlets, Outhgill, provides a central point for the community—but after the closure of the village hall (the Travers Institute)[3] in the 1960s, and the final closure of the post office in the 1990s, only the parish church remains. St Mary's still has a small but loyal and enthusiastic congregation, and services are held weekly.

Some notable historical people and events

Coins of the Emperors Galba and Hadrian from the Mallerstang Hoard

The dale is closely associated with Lady Anne Clifford, and the ancient road to the east of the river is known as “Lady Anne's Highway” in memory of the indomitable Countess of Pembroke, who often travelled along this track while moving between her many castles. It is, however, much older than this and was used by the Romans as a route between Wensleydale and their forts along what is now the A66.

A local shepherd found a hoard of Roman coins on Mallerstang Edge near the Highway in 1927. (The "Mallerstang hoard"[4] is now in the Tully House Museum in Carlisle.)

But the Romans were using a track that had existed at least since the Bronze Age, and there is evidence for even earlier use in recent finds[4] of flint tools nearby. 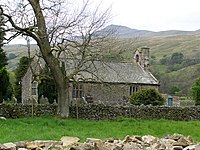 St Mary's Church in Outhgill was founded in the early 14th century by another powerful patroness, Lady Idonea de Veteripont – but, having fallen into disrepair, was restored by Lady Anne in 1663 (as a plaque over the door records).

Pendragon Castle, was also restored (in fact more or less rebuilt) by Lady Anne in 1660. According to legend it is supposed to have been built by Uther Pendragon, father of King Arthur. Needless to say, there is no evidence for this idea, and from the limited archaeological investigations no evidence for any building here before the Norman castle built in the reign of King William Rufus.

The castle was one of Lady Anne Clifford’s favourite places. But her heir, the Earl of Thanet, abandoned it; and over the next three centuries it gradually deteriorated to the sad but beautiful and atmospheric ruin that we see today.[5]

One of the other notable Lords of the Manor was Sir Hugh de Morville, Lord of Westmorland. He was one of the four knights who murdered St Thomas Beckett in Canterbury cathedral, and legend says that he took refuge here afterwards before being banished to France. (Hugh Seat is named after him, and Wild Boar Fell, as seen from beyond the castle to the north, is said to have haunted him because in certain lights its profile strongly suggests a face and mitre: the recumbent St Thomas.)

On 24 February 1537 ten men from Mallerstang were hanged in the dale for taking part in the Pilgrimage of Grace. The local rebels had gathered at Lammerside Castle, just north of Mallerstang, and joined the 6000 men who marched through Westmorland towards Carlisle. This uprising against King Henry VIII was put down by a military force commanded by Thomas Howard, 3rd Duke of Norfolk, aided by Sir Thomas Wharton, 1st Baron Wharton (whose seat, Wharton Hall, lies just to the north of the parish). From the many prisoners taken, 74 were picked out to be executed in their own villages.

The tradition of dissent was still alive in the 17th century when ten or more families in the dale became Quakers – at a time when all non-conformists suffered considerable persecution. The grandson of one of these Quaker families, George Birkbeck, set up the “Mechanics Institute” in London, which later became Birkbeck College of the University of London. The Quakers' strong influence in the area continued until the Wesleyans largely replaced it in the 19th century.

Two brothers from Clapham, Yorkshire, moved to the area in the late 18th century. Richard Faraday became a notable businessman in Kirkby Stephen, where a road is named after him. His younger brother, James, set up as a blacksmith in Outhgill (in the house now called Faraday Cottage). As he moved to London a year before their third child was born, the area narrowly missed being able to claim the great scientist Michael Faraday as a Mallerstang man. 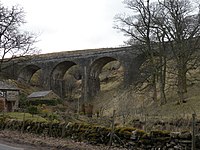 The most conspicuous structure in the dale is the Settle–Carlisle Railway, built between 1869 and 1876, and one of the last great engineering works in Britain to be built almost entirely by muscle power. It was constructed at great cost not only of money but also of human life. Twenty-five of those who died during the construction of this section of the line (both builders and members of their families) are buried in unmarked graves in the churchyard of St. Mary's. A memorial to them was erected there in 1997.[6]

The people of the Dale 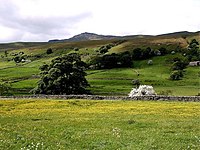 From the time of its Norse settlers until the mid-20th century, farming was the main occupation in the dale. There are also the inconspicuous remains of some small-scale coal and lead mining, but this was never very profitable and did not survive beyond the 19th century. Historically the population varied between about 250 and 350.

During the 20th century, as the small farms merged, and as machinery reduced the need for manpower, the population gradually declined. By mid-century it reached a low point of about 50; but since the late 1970s the remaining farming families have been joined by many “off-comers”, attracted by the beautiful scenery to make their homes here, and the population has by now doubled again from its lowest point.

Even though it is remote from most 21st-century amenities, Mallerstang has survived as a real and thriving small community, with many of its ancient traditions intact.