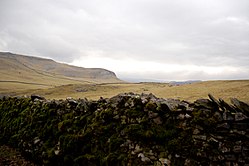 The Dales as seen on a trail out of Clapham

The church of St James in Clapham was founded in Norman times, and originally dedicated to St Michael. It is mentioned in records dating back to 1160. The village and church were burned during a Scottish raid following the Battle of Bannockburn in the early 14th century. The church tower was probably erected following this incident, but the rest of the church dates from the 19th century.

In the 14th century John de Clapham, who took his surname from the village, was a supporter of the Earl of Warwick and lived at Clapdale Castle.[1] His descendants took part in the Wars of the Roses[2] on the side of the House of Lancaster.[3]

Since the 18th century Clapham has been home to the Farrer family who established their Ingleborough estate. The family owns, and is responsible for, much of the land, walls, woods, fields and moors of the village, surrounding countryside and farms.

Electricity has been generated on the Ingleborough estate since 1893. There is an operating water turbine-powered generator at the top of the village next to the waterfall. It was installed in 1948. Originally it supplied the church, Ingleborough Hall, Home Farm and 13 street lights. There is another turbine in the sawmill which is in use although it is now helped by an electric motor when the larger saw is in use.

In August 1947 the Trow Ghyll skeleton was discovered in a cave above the village. 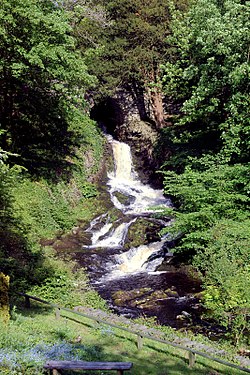 The waterfall at the top of the village.

Clapham is situated at the base of Ingleborough mountain, one of Yorkshire's "Three Peaks" - Ingleborough, Whernside and Pen-y-ghent, and is a starting point for its ascent.

Running through the village is Clapham Beck, fed from Fell Beck which starts on the slopes of Ingleborough and sinks into Gaping Gill, England's highest waterfall, where Fell Beck drops 110 metres vertically into a pothole, and exits via Ingleborough Cave into Clapham Beck. The beck feeds into the River Lune via the River Wenning. The beck is crossed by four bridges in the village (two footbridges: Brokken Bridge and Mafeking Bridge, and two road bridges).

Above the village is a man-made lake built and expanded in the 19th century. This provided pressure for the water turbines and the drinking water supply, while the outflow fed an artificial waterfall at the top of the village.

Clapham lies on the Craven Fault zone, a complex geological fault which marks the division of the sandstone rocks of the Bowland area and the limestone of the Ingleborough area. However, the valley of Clapham Beck has cut through the limestone and into the underlying Ordovician basement rocks which produce soils that are acid, not alkaline like those on the limestone. This is beneficial to the many species of rhododendron planted along Clapdale and which would suffer in alkaline soils.

From 1939 until 2000 The Dalesman magazine was based in the village.

The car park is run by the Yorkshire Dales National Park, with fees going directly to it.

The Cave Rescue Organisation, which serves people and animals above and below ground across a wide area of the Dales, is based in the village.

The village is served by Clapham railway station which is situated a mile south-west of the village. 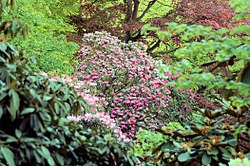 Rhododendrons planted by Reginald Farrer are still growing in the woods above the village.

The notable botanist Reginald Farrer (1880–1920)[4] was brought up in Clapham. He collected many species of rhododendrons, shrubs and alpines in China, Tibet and Upper Burma between 1914 and 1920. Many of these were planted on the estate by Farrer. In some places he fired seeds at cliff faces from a shotgun, to give a ‘natural’ spread to his rock plants.[5]