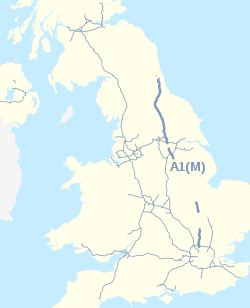 Includes one section under construction in 2016 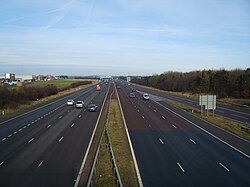 A1(M) is the designation given to a series of five separate motorway sections of the A1 in Great Britain, connecting London with Edinburgh. The first section, the Doncaster Bypass, opened in 1961 and is one of the oldest sections of motorway in Britain.[1] Construction of a new section of A1(M) is currently underway between Leeming and Barton, with an anticipated opening in 2017. When complete it will link the Barton-to-Washington section with the Darrington-to-Leeming Bar section, forming the longest A1(M) section overall and reducing the number of separate sections from five to four.

There has been a proposal to renumber the section of A1(M) to M1 between Micklefield to Washington, making this section a northern extension of the M1.[2]

The A1 is a series of alternating sections of all-purpose road and motorway. Until Newcastle upon Tyne it is all dual carriageway, but from there to Edinburgh it is a mix of dual and single carriageway. The table below summaries the road as motorways and non-motorways sections. 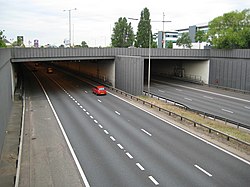 The northern portal of the Hatfield Tunnel

This section opened in stages: 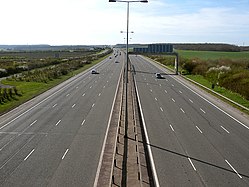 This section, opened in 1961, is one of the oldest sections of motorway in Britain; it is entirely two lanes in each direction. 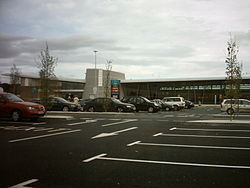 Wetherby Services on the A1(M).

This section opened in sections:

When this section opened it ended at a temporary terminus south of the M1. There was a final exit into Micklefield Village for non-motorway traffic onto what is now the access road. During the first week of June 2009, Junctions 44 and 45 were renumbered to 43 and 44. At the same time the existing A1/A659 Grange Moor junction became A1(M) Junction 45.[4] As a result many atlases show incorrect junction numbering for this stretch of motorway.

Work on upgrading the Leeming Bar to Barton section to three-lane motorway began in April 2014. Work was expected to be completed by summer 2017, by which time the A1 will be continuous motorway standard from Darrington, Yorkshire to Washington, County Durham.[8] However, in spring 2017, the Highways Agency announced that the full opening would be delayed until December 2017.[9]

There will be two junctions on the route; J52 will be situated on the A6136 near Catterick and J53 at the existing Scotch Corner junction for the A66. As with other sections an access road will run parallel to the A1(M) for local traffic.

This section opened in stages: