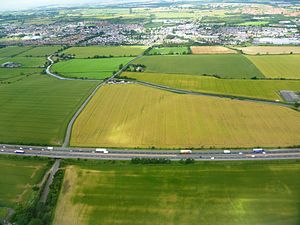 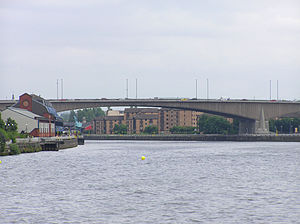 M8 running alongside the Clyde

The M8 motorway connects Glasgow and Edinburgh, and serves other large communities including Airdrie, Coatbridge, Greenock, Livingston and Paisley. It is one of the busiest in the United Kingdom and the busiest in Scotland.[1] The motorway is 60 miles long and is notorious for traffic jams, especially its Central Glasgow section. The motorway has one service station, located in Harthill in Lanarkshire. For many years there was a gap in the M8 between Baillieston and Newhouse east of Glasgow, where the route was taken over by a stretch of dual carriageway, the grade-separated A8, largely of 1963 vintage. The main works to build the missing section of motorway started in 2014 and were completed in 2017.

With the advent of motorway-building in the United Kingdom in the late 1950s, the M8 was planned as one of a core of new motorways, designed to replace the A8 road as a high-capacity alternative for intercity travel. The motorway was constructed piecemeal in several stages bypassing towns, beginning in 1965 with the opening by Minister of State for Scotland George Willis of the bypass of Harthill. In 1968 the Renfrew Bypass was opened as the A8(M), becoming part of the M8 when the motorway to the west was connected.[2] The Glasgow inner city section was constructed between 1968 and 1972, using a scheme outlined in the Bruce Report, which was published as the Second World War was closing, and which set out a series of initiatives to regenerate the city. Bruce's scheme evolved into what would become the Glasgow Inner Ring Road, a motorway "box" which would encircle the city centre, connected to the Renfrew Bypass at its south western corner, and the Monkland Motorway (built over the former route of the Monkland Canal) towards Edinburgh at its north eastern corner. Together, these three sections of motorway make up the present day M8.

Most of the motorway's length was complete by 1980. Since then, the only additions have been a new interchange with the M80 motorway in 1992, a four-mile eastern extension from Newbridge to the then-new Edinburgh City Bypass in 1995, and the new junction on the approach to the Kingston Bridge in Glasgow connecting to the new M74 extension in 2011.[3] There are plans to complete the one remaining unfinished section between Baillieston and Newhouse in the near future, providing three new motorway junctions to serve Coatbridge, Bargeddie and Holytown amongst others.[4]

From the Edinburgh City Bypass, the road runs west to junction with the M9 motorway (for the Forth Road Bridge), bypassing to the north of Livingston and south of Bathgate. It continues across Scotland's Central Belt before abruptly terminating at Newhouse. The next section – originally designated the Monkland Motorway – begins on the boundary of the city of Glasgow at the M73 motorway junction (the main interchange for all routes south via the M74 motorway) before passing through the districts of Barlanark, Riddrie, Dennistoun and Townhead (following the route of the abandoned Monkland Canal) on the way directly into the city centre. The central section – the uncompleted Glasgow Inner Ring Road – contains numerous junctions serving local communities including Cowcaddens, Garnethill, Kelvingrove and Anderston. It then crosses the River Clyde on the Kingston Bridge, runs west through Kinning Park, Bellahouston and Hillington before leaving Glasgow. Continuing west, it bypasses Renfrew and Paisley (carrying traffic directly over what was the main runway at Renfrew Airport, closed in 1966) before serving Glasgow International Airport, running to the south of Erskine, and terminating at Langbank, around 10 miles east of Greenock.[5]

The M8, more explicitly the Glasgow section, is unusual amongst UK motorways (and more similar to many US Interstates) in that it directly serves (and bisects) a large urban area, whereas most other motorways bypass such conurbations. The central Glasgow section is elevated above much of the surrounding area on a concrete viaduct, including several incomplete constructions such as several pedestrian overpasses and adjoining arterial roads, and has slip roads that enter and exit from the passing (right-hand) lane. It contains one of the busiest river crossings in Europe at the Kingston Bridge. The speed limit there is reduced to 50 mph as a result.

There were successive failed attempts to build the southern flank of the Glasgow Inner Ring Road as defined by the Bruce Report. This section of road, which is an extension of the M74, differs in route from the original Bruce proposals of the late 1940s, and was intended to funnel long distance traffic from the north and south which is bound for the southern Clyde Coast and allow it to bypass the urban section of the M8. Following many years of intensive political discussion and legal battles, construction of the M74 Completion scheme began in 2008, and it opened in June 2011. Early indications are that the new road has been successful in reducing traffic levels on the urban section of the M8.

The root cause of the high congestion on the urban section of the M8 is that traffic from the M73 and M80 is forced onto the eastern section of M8 which within two miles converges from five lanes to two on the Kingston Bridge approaches. The result of this is often long periods of traffic congestion. Prior to the construction of the M74 extension, incentives were undertaken in an attempt to minimise delays on this section; these include restricting exits around the Kingston Bridge, a ramp metering programme, and expanded use of electronic signing above and beside the motorway as part of the CITRAC (Centrally Integrated TRAffic Control) system.[6][7]