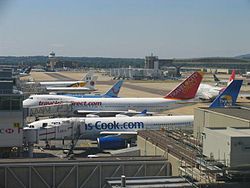 Charter airlines generally prefer Gatwick to Heathrow as a base for London and the South East. From 1978 to 2008, many flights to and from the United States used Gatwick because of restrictions on the use of Heathrow implemented in the Bermuda II agreement between the United Kingdom and the United States. 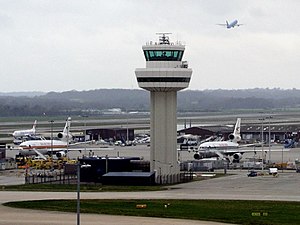 The airport is named after the village of Gatwick long since razed out of existence by the airport. The name "Gatwick" is first recorded dates in 1241, as the name of a manor on the site of today's airport. The name though is older, from the Old English words gat wic, "goat farm".[2]

Until the 19th century the Manor of Gatwick was owned by the De Gatwick family.[3] In 1890, the family sold the area to the newly established Gatwick Race Course Company who in the following year opened a racecourse beside the London–Brighton railway, together with a dedicated station including sidings for horse boxes.[3] The course held steeplechase and flat races. During the First World War the course hosted the Grand National.[3]

In the late 1920s, land adjacent to the racecourse at Hunts Green Farm along Tinsley Green Lane was used as an aerodrome. Following a change in land ownership, the aerodrome was licensed in August 1930.[4] Later the same year, the Surrey Aero Club was formed at the aerodrome by a Mr Waters, who had been the manager of Home Counties Aircraft Service Ltd based at Penshurst Airfield in Kent. Surrey Aero Club used the old Hunts Green farmhouse as club house.[5] Redwing Aircraft Company bought the aerodrome in 1932 and operated a flying school. The aerodrome was also used for pilots flying in to races.

In 1933, the Air Ministry approved commercial flights from Gatwick. The same year, the aerodrome was sold for £13,500 to Morris Jackaman, an investor who formed a new airport company named Airports Limited in 1934. Hillman's Airways became Gatwick's first commercial airline operator as a result of starting scheduled services from the airport to Belfast and Paris. A new railway station served by two trains an hour on the Victoria–Brighton line opened in September 1935. That year also saw the formation of a new airline named Allied British Airways, the result of a merger between Hillman's Airways, United Airways and Spartan Airways. The newly formed carrier, which subsequently shortened its name to British Airways, became Gatwick's principal operator.[3]

In 1936, the world's first circular airport terminal, called The Beehive, opened at Gatwick. It was designed by Frank Hoar and included a subway to Gatwick racecourse railway station that enabled passengers to travel from London Victoria Station to the aircraft without stepping outside. On 17 May 1936, the first scheduled flight to depart The Beehive was bound for Paris. The applicable air fare was £4 5s, the price including a first class rail ticket from London Victoria.[3]