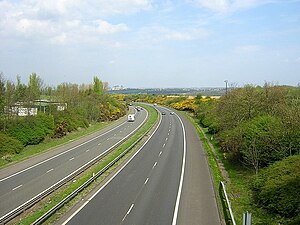 The A74(M) and M74 form a major motorway in the United Kingdom, connecting Glasgow to Carlisle and the M6. Following an extension opened on 28 June 2011, it now connects to the M8 motorway west of Glasgow.

From its junction with the M8 just south of the Kingston Bridge, the newest section passes through the Glasgow districts of Govanhill, Polmadie, Oatlands and parts of the nearby towns of Rutherglen and Cambuslang on an elevated embankment, with junctions at Kingston, Polmadie Road, Cambuslang and Tollcross before connecting to the pre-existing M74. It then runs in a roughly south-easterly direction past the Clyde Valley towns of Bothwell, Hamilton and Motherwell before meeting the cross-country A71 at Larkhall. It passes west of Lanark and beyond Abington, where it changes into the A74(M) and then goes to Moffat and Lockerbie, before making an end-on connection with the M6, near Longtown.

The A74 was the original route from Glasgow to Gretna, where it met the A6 south to London.

Starting in the 1930s, the single-carriageway road between Gretna and Glasgow was progressively upgraded to dual carriageway, being completed in the early 1970s with the completion of the Gretna bypass.

At the northern end, it was not possible simply to add to the existing carriageway because of the built-up nature of the area. A bypass was built as one of Scotland's first motorways, the M74, from Draffan to Maryville, north of Uddingston, completed by 1969. Junctions were originally numbered from south to north, as there were plans to extend northwards. This did not happen for many decades.

The southern sections, where there was no need to bypass the existing route, were not originally upgraded to motorway standard, but to dual carriageway without hard shoulders or full grade separation. The gradual construction of the M6 from Rugby (where it met the M1 to London) to Carlisle in 1970, where it terminated on the A74, meant that the route from Glasgow to London was entirely dual carriageway.

This led to calls for the already dualled A74 from Draffan to the M6 to be upgraded a second time, to motorway standard. As the government had already invested in the dual carriageway upgrade, they initially resisted these calls. In 1972 the Government agreed to extend the M74 from Draffan to today's J12 at Millbank. It was built in three sections, opening 1986–87. It was constructed to dual two-lane standard, and included a bypass of Lesmahagow, as the M74.

In 1984, in preparation for the southwards extension, the junction numbers were changed to run from north to south: Raith (junction 5) on the original south-to-north numbering remained as junction 5, with Maryville (the most northerly junction at that time) becoming junction 4, leaving lesser numbers available for junctions for the expected continuation of the motorway northwards.

When the first southern extension opened, Draffan, originally junction 1, ceased to exist and junction 9 (the first junction on the new extension) was and still is only a southbound exit onto the old A74 just south of Blackwood village, to serve the villages of Blackwood, Kirkmuirhill, Lesmahagow and Coalburn.

In 1987, the government committed to upgrading the remaining A74 from J12 to the M6 to motorway standard. When the first section opened, as far south as Abington (J12-J13) in 1991 it was numbered M74. Following this, the government announced that the route would be completed as the M6, as the two motorways would meet head on at Carlisle. The Scottish section of the A74 was then upgraded in sections, not all contiguous, as the A74(M), a temporary number until all the sections were complete, and the eight-mile section in Cumberland had been constructed and connected to the M6. They were constructed with dual three-lane carriageways. In 1995 the first northern extension was opened to Fullerton Road in Glasgow, as M74. The A74 upgrades were complete by 1999. This left an anomaly – the M74 began at Glasgow, then at J13 changed to A74(M) for the 40 miles to the border. Meanwhile, the eight-mile section of A74 in Cumberland was not upgraded due to lack of funds, leaving the "Cumberland Gap" of dual carriageway between the three-lane motorways. Until around 1996, the change of designation to M6 once the Cumberland Gap had been closed was definite.[1] When the Scottish Executive was established in 1999, taking over responsibility for roads in Scotland, Sarah Boyack said that "We have no current plans to rename or redesignate the M74 or A74(M) motorways between Glasgow and the border as the M6".[2]

Plans to upgrade Cumberland Gap from Gretna to Carlisle [3] were announced in 2004. Costing £174m, this was constructed as M6 as originally planned in the 1990s, and was opened on 5 December 2008.[4] The project also included the construction of a new bridge crossing the River Esk.[5] This means that there is now a continuous motorway from London to Glasgow, with four numbers (M1, M6, A74(M) and M74).

Construction on the six-lane M74 Northern Extension (M74 Completion) northwards by five miles through the south-eastern part of Glasgow to meet the M8 started in 2008, with opening on 28 June 2011.[6] The extension involved the demolition of the Rosebery Park football ground.[7]

The city centre section is supposed to perform a similar role to the never-built southern flank of the Glasgow Inner Ring Road planned in the 1960s, and first set out as a scheme in the Bruce Report of the 1940s, but only half-completed. The scheme was at the centre of a road protest from local campaigners and environmentalists; their appeal against the road orders collapsed in June 2006. Construction began on 28 May 2008.[8]

The project, initially expected to cost £444 million, ran considerably over-budget at £692 million.[9] There was a £12 million allowance for grouting of old mine workings.[10] 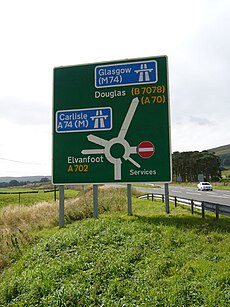 Road sign on the A702 showing the change in designation.

Construction of the East End Regeneration Route which will connect the M74 Northern Extensions with the M8 motorway at the Provan Gas Works interchange with the M80 motorway. The Phase 1 and Phase 2 from M74 to Parkhead began in 2008 and completed in 2012, but Phase 3 from Parkhead to M80 will not be started until after 2014.[11] It will make use of existing stretches of road and filler sections on currently derelict land.

A new sculpture is planned near Gretna called the Star of Caledonia. One intention is for it to be viewed from the motorway, although there will be no motorway signs to indicate the structure.[12]

When the original motorway sections were built in the 1960s, the motorway was numbered south-to-north, with Draffan at its southern terminus with the A74 Dual Carriageway being junction 1 and Maryville junction 6. When the M74 was to be extended south of Draffan in the 1980s, it was renumbered, in 1984 in preparation for the opening of the southern extension, north-to-south. The Raith or Raith remained as J5, while Maryville became J4, allowing for later extension Northwards, towards Glasgow. The original junction 1 at Draffan was closed, with the first new junction 9 (Blackwood) replacing it, using the southbound carriageway of the old A74 as a slip road. The remains of the semicircular access road to the southbound carriageway are still visible at Draffan Road, with the Blackwood slip road now used as an access road to new housing. In preparation for the extension to meet the M8 south of the Kingston Bridge,in 2010, junctions 1–3 of the First Northern Extension, were renumbered 2A, 3 and 3A to accommodate the new junctions. If the M74 was to become a Northern Extension of the M6 renumbering would again be required,reverting to numbering south-to-north with the present M74 J1 becoming the M6 J70.

Official sites on the upgrades