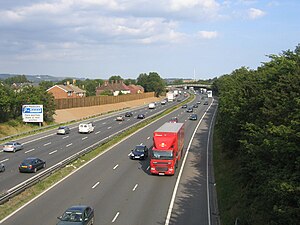 The M20 is a motorway in Kent. It follows on from the A20 at Swanley, meeting the M25, and continuing on to Folkestone, providing a link to the Channel Tunnel and the ports at Dover. It is 50.6 miles long.

The road starts at its junction with the M25 motorway and A20 road just east of Swanley, then continues south east across the River Darent, north of Farningham through the North Downs, past West Kingsdown and Wrotham to meet the M26. It then strikes east, running north of Addington. When it reaches junction 4 it passes south of New Hythe and runs parallel to the Medway Valley railway line before crossing it close to junction 5. This next section is the Maidstone bypass. High Speed 1 then runs parallel to the motorway as it continues to the north of Bearsted, crosses the Swanley to Ashford (via Maidstone East) Line then out into the countryside alongside Leeds Castle. Proceeding south of Lenham and Charing it is crossed by the Ashford and CTRL railway lines before becoming the Ashford bypass. Travelling past Brabourne Lees it is once again joined by the CTRL and the East Stour.

Just north of Saltwood it reaches the Channel Tunnel terminal and is crossed by HS1 for the last time. The final section runs along the northern suburbs of Folkestone.

The M20 was, in common with many United Kingdom motorways, opened in stages:[1][2]

These sections of the M20 were known as the Maidstone Bypass. This road was then numbered as the A20(M)[3] as it bypassed the stretch of A20 through Maidstone which was renumbered A2020. This was the first stretch of motorway to open south of London.[4] Plans for a bypass of Maidstone had existed since the 1930s, originally as an all-purpose project, before being upgraded to motorway standard in the 1950s.[5] When the motorway was extended westwards towards London in the 1970s, it was renamed M20 and the A2020 reverted to A20.

This section ended at a temporary junction near West Kingsdown.[6]

This section of the route was difficult to construct due to its steep descent down the North Downs escarpment.

The section around Ashford (junctions 9–10) was originally the A20 Ashford Bypass with actual construction having started before World War 2 – although the route itself was not opened until 19 July 1957.[7] The bypass started at Willesborough near the current location of junction 10 and terminated south of the existing junction 9 at the current Drover's Roundabout. A section of the old bypass is still visible now named Simone Weil Avenue. The original bridge that brought Canterbury Road over the bypass is still visible as the bridge was not reconstructed when the motorway was constructed. This section of motorway has no hard shoulder indicating the smaller width of the old bypass.

This left the motorway in two sections, with the 14-mile gap running via the A20 – this was referred to locally as The Missing Link.[8] The level of traffic was not considered necessary to complete the route. Most of the traffic for the Channel ports was using the A2/M2 route. When the Channel Tunnel was ready for construction, it was decided to complete the M20 between junctions 8 and 9 and this opened in 1991. Concurrent to this was the extension to Dover as part of the A20 which opened in 1993.[6] A new junction was also constructed (11A) for the Channel Tunnel. 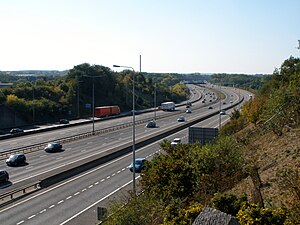 Following completion of the junction 8 to 9 section, the M20 was three lanes either side of the original A20(M) section. This was a bottleneck, so it was decided to widen this section of motorway. The road here was increased to a dual three or four-lane road with two-lane distributor roads either side. This section was opened in 1995.[6]

Between 2006 and 2007 junction 10 near Ashford was remodelled to increase capacity when the bridges across the motorway was modified to provide three lanes of traffic at the roundabout, and local approach roads were widened, with new traffic lights to control traffic flows at the junction between the A292 Hythe Road and the London-bound M20 entry slip road. A new footbridge was also constructed across the motorway.[9] The cost was £4.9 million.[10]

A Controlled motorways scheme was introduced in West Kent between junctions 3 and 5, with variable speed limits and hard shoulder running during periods of heavy traffic flow.[11]

The Highways Agency proposed a new M20 junction 10a and link road to the A2070 at Ashford in Kent, east of junction 10 [12] to support the development of South Ashford which has been identified as a growth area in the South East. In May 2012, it was announced that the scheme would be postponed for the short-term future.[13]

Data from driver location signs are used to provide distances and carriageway identifier information.[14] Where a junction spans several hundred metres and start and end points are available, both are cited.