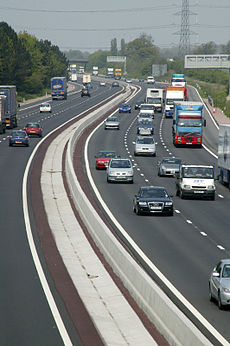 The M18 is a motorway in Yorkshire running from the east of Rotherham to Goole. It is approximately 26 miles long.

The M18 runs in a north-east/south-west direction from junction 32 of the M1 motorway to junction 35 of the M62 motorway. It passes east of Rotherham, south-east of Doncaster and Armthorpe, and west of Thorne. It meets the A1(M) at junction 2 (A1(M) junction 35)--known as the Wadworth Interchange—and the M180 motorway at junction 5. Access to Doncaster is provided from junctions 3 (A6182) and 4 (A630)

Much of the M18 is a two-lane dual carriageway, and carries relatively low volumes of traffic. However, the section linking the M1 and A1(M) is much busier and has three lanes in each direction. It then passes over the Wadworth Viaduct. To the north it then crosses the East Coast Main Line, and until its closure and the dismantling of the pit head gear, a large colliery could be seen to the south at Rossington.

The Finningley and Rossington Regeneration Route Scheme (FARRRS) is a new road scheme[1] which will run from the M18 at Junction 3 to Robin Hood Airport, improving access primarily to the Airport but also to Rossington and the new Doncaster iPort. Work started in 2013 and the road is due to become operational in 2016.

The road will run, at first as a dual carriageway and then as single carriageway from the M18 junction 3 to Parrots Corner and the A638, where it will terminate and travellers will need to follow existing roads (A638 and Hurst Lane) to the airport itself.

Work is due to start on 20 June 2014 to upgrade the section of the M18 between junction 2 (A1(M)) and junction 3 (A6182) northbound to three lanes, in order to provide better access to FARRRS and Doncaster town centre.

The M18 was originally to be part of the M1, but it was decided to route the M1 towards Leeds instead of Doncaster, and the routing of what would have been the M1 east of Sheffield became the M18.[2]