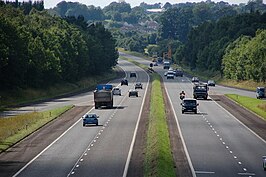 View west towards Castledawson at Ballygrooby near Randalstown

The M22 is a motorway in County Antrim. It is 5½ miles long and connects the A6 with the M2.

In 1964, the Northern Ireland Government announced plans for an extensive network of motorways.[1] Part of this was an M22 motorway from the M2 near Antrim to Castledawson, County Londonderry. With the increase in civil disorder, known as the Troubles, the motorway programme was nearly all cancelled and the M22 was left as it currently stood in 1975.[2]

It was opened in two sections:[3]

The motorway starts shortly after junction 7 of the M2 Northwards at the split in the carriageways on the M2 around a mile from junction 1 of the M22, where the M2 was to head north towards Ballymena.[3] After meeting junction 1 – the site of the Junction One retail outlet – it continues west across Ferguson's Water, the Belfast-Londonderry railway line and Mill Burn as it bypasses the suburbs of Antrim to the north. Between junctions 2 and 3 it passes between Randalstown and the Randalstown forest, crosses the River Main, and then ends at junction 3. The M22 is a two-lane dual carriageway throughout its length.