Bedale is a market town in the North Riding of Yorkshire, it is 34 miles north of Leeds, 26 miles southwest of Middlesbrough and 7 miles southwest of Northallerton. The town is listed in the Domesday Book as part of Catterick Wapentake, also known as Hangshire (so named from Hang Bank in Finghall and (so they say) because of the many gallows used to execute marauding Scots); it was split again and Bedale remained in East Hang.

Bedale Beck is a tributary of the River Swale, which forms one of the Yorkshire Dales, with its predominance of agriculture and its related small traditional trades, although tourism is increasingly important.

Before the Harrying of the North Bedale was held by Torpin (Thorfinn). The parish church dates from this time (as evidenced by its crypt), before significant remodelling.

Count Alan of Brittany, lord of Richmondshire, granted the manor to his relative Bodin of Middleham for a short time. The new market town was founded by one Scollandus, a Breton officer, a charter confirmed by Henry III. Bedale Hall marks the site of a castle built in the reign of King Edward I by Sir Bryan FitzAlan, Lord of the Manor of Bedale and later Baron FitzAlan: one of Edward I's more successful generals, victorious against Llywelyn the Last, Guardian and Keeper of Scotland for Edward I, present at the Battle of Falkirk (1298) and the siege of Caerlaverock (1300) and commander of several strategic castles.

The Stapletons inherited the manor in time and in the Wars of the Roses held it for Lancaster, until Warwick the Kingmaker, Clarence and Gloucester obtained Richmond and Middleham Castles. Bosworth Field turned it over again.

The Lordship of Bedale Manor eventually descended in modern times to Lord Beaumont. 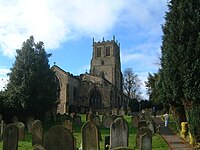 The parish church is St Gregory's, a church of Gothic architecture. It retains some relics from before the Reformation. It has a painting of St George slaying the dragon and also contains a stone Viking-era grave marker, notable for a rare depiction of the legend of Wayland Smith. When Scots raided the countryside, inhabitants expected to find security in St Gregory's pele tower. Its patron is the present Beresford-Peirse baronet.

St Gregory's has a daughter church known as St Augustine's Church and Village Hall at Leeming Bar. There are other local Church of England chapels, such as St Gregory's at Crakehall and St John the Baptist's at Leeming.

Existing historic buildings include an 18th-century apothecary's store for leeches, an underground ice house used for preserving food and the 14th-century market cross. Bedale is home to a small museum, numerous Georgian buildings and a railway station on the Wensleydale Railway, which runs to Redmire by way of Leyburn.

The Thorp Perrow Arboretum lies nearby, as do the villages of Burneston, Burrill, Cowling, Exelby and Firby.

The town has many local shops, pubs and eating places along its market place. It holds a market every Tuesday on the cobbles that line the market place. It also has a leisure centre with full gym, swimming pool and astroturf sports pitches. Bedale Athletic Sports Association provides football, cricket, hockey, squash and tennis. Big Sheep Little Cow Farm is a petting zoo and the Wensleydale Railway is the local line.