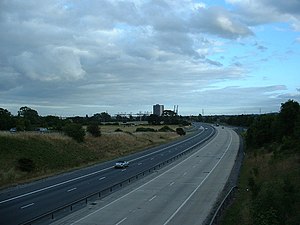 The motorway begins at Redbridge near Totton at a grade-separated roundabout with the A35, heading north, briefly as a dual three-lane motorway. At its first junction, it reduces to two lanes and continues east of Hillyfields. After a further mile it reaches a junction with the M27 at a signal-controlled roundabout. North of the M27 it enters the countryside and terminates after a further mile of dual two-lane road at another roundabout, this time with the A3057 at Upton.

The route has several features that are inconsistent with UK motorway standards, including a sharp bend at its southern terminus, and an at-grade roundabout at its junction with the M27. Hampshire County Council's LTTP to 2026 (Long Term Transport Plan) identifies the need for an 'M271 Spur' at the southern end to connect it to the A33 towards the docks in a free-flow interchange.