The Dartford-Thurrock River Crossing, commonly known as the Dartford Crossing and until 1991 the Dartford Tunnel, is a major road crossing of the River Thames, carrying the A282 road between Dartford in Kent to the south with Thurrock in Essex to the north. It consists of two bored tunnels and the cable-stayed Queen Elizabeth II Bridge. The only fixed road crossing of the Thames east of the metropolis, it is the busiest estuarial crossing in the United Kingdom, with an average daily use of over 130,000 vehicles.[1] It opened in stages: the west tunnel in 1963, the east tunnel in 1980 and the bridge in 1991. The crossing, despite not being under motorway restrictions, is considered part of the M25 motorway's route, using the tunnels northbound and bridge southbound. Described as one of the most important road crossings in Britain, it suffers from heavy traffic and congestion.

The crossing's development started in the late 1930s, but was interrupted due to the Second World War and resumed in the 1950s. The original tunnel catered for a single lane of traffic in each direction, but rising traffic levels required the second tunnel to be built. The M25 connected to the tunnels at both ends when completed in 1986, and this increased traffic put pressure on the tunnels' capacity. A Private Finance Initiative scheme was started in 1988 to build the bridge. The combined crossing now handles four lanes of traffic in each direction.

The crossing had always been tolled, and from 1 April 2003 this became a charge, though since 2008 it has been free from 10 pm to 6 am. An electronic charging scheme (Dart Charge) began in November 2014. As a result, the charge can no longer be paid in cash and the old toll booths have been removed. A residents' scheme is available, offering further discounts for people living near the crossing.

The crossing spans the River Thames between Dartford, Kent, to the south and Thurrock, Essex, to the north. It is about 20 miles east of the centre of London.[2] The two tunnels are 1,560 yds long,[3] while the cable-stayed bridge is 450 ft high[lower-alpha 1] with a main span of 1,475 ft.[5] A 50mph speed limit is in place in both directions.[6] The high-speed rail line High Speed 1 from St Pancras International Station to Ebbsfleet International Station passes under the crossing approach roads on the north side of the river, at a near right angle.

The design capacity is 135,000 vehicles per day, but in practice the crossing carries around 160,000.[7] It has been described by the Highways Agency as "a vital transport link for the national and South East economies",[8] by the former Secretary of State for Transport, Patrick McLoughlin, as "a crucial part of the country’s strategic road network", and by the local Thurrock Council as "one of Europe's most heavily used crossings and complex traffic management systems".[9] It is signed as a major destination on London's orbital route, the M25, though the crossing and its approach road are an all-purpose road (the A282),[lower-alpha 2] allowing traffic prohibited from motorways to use it. Southbound traffic crosses the four-lane bridge, while northbound traffic uses both of the two-lane road tunnels. The bridge can be closed due to high winds[6] or maintenance. On these occasions, traffic uses the tunnels in both directions.[13] 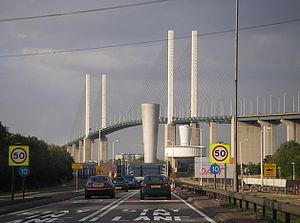 Northbound vehicles approaching the entrance to the western tunnel, with the bridge in the background

The idea of a tunnel crossing was first proposed by the Ministry of Transport in 1924.[14] Initial reports at the start of the year suggested a crossing between Tilbury and Gravesend, replacing a ferry service,[15] but this had been rejected by July in favour of a route further upstream, near Dartford.[16] By 1929, the total cost of building the tunnel had been estimated at £3 million.[17] The tunnel was planned to be part of a general orbital route around London and was provisionally known as part of the "South Orbital Road".[18]

The first engineering work to take place was a compressed air driven pilot tunnel, which was drilled between 1936 and 1938.[19] Work on the tunnel was delayed due to World War II, and resumed in 1959, using a Greathead Shield, similar to the work on the Blackwall Tunnel some 60 years earlier.[19] The delay in work due to the war allowed the tunnel's design to be improved, which included a better ventilation system. After negotiations with the Ministry of Transport, Kent and Essex County Councils successfully levied a toll on the tunnel before it opened in 1960.[20] The two-lane bore tunnel[21] opened to traffic on 18 November 1963;[3][22] the total project cost was £13 million[23] and it initially served approximately 12,000 vehicles per day.[21] 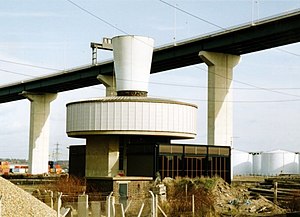 A ventilation shaft to the north of the east tunnel

The first tunnel was expected to carry two million vehicles a year[23] but by 1970 was carrying over eight million.[26] That year, Michael Heseltine, then a junior transport minister, announced that a second tunnel would be built in conjunction with the North Orbital Road, later to become the M25.[27]

Construction was approved in April 1971, with an initial expected opening date in 1976.[28] Work was delayed due to a lack of funds, which was resolved by EEC funding granted in 1974.[29] The second tunnel opened in May 1980, allowing each tunnel to handle one direction of traffic, by which time the joint capacity of the two tunnels had increased to 65,000 vehicles per day.[21] Connection of the crossing to the M25 was completed on the northerly Essex side in September 1982 (Junction 31), and to the southerly Kent side in September 1986 (Junction 1a).[30] Following the completion of the M25 in 1986, the daily demand had grown to 79,000 vehicles.[21] 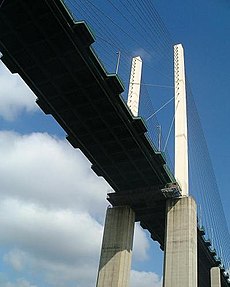 Each tower on the Queen Elizabeth II bridge is 450 ft high.

∂ During the early 1980s, it was anticipated that traffic through the tunnel would rise on the completion of the M25 in 1986. At the time, the expectation was that other routes in London would be improved instead, diverting 15% of traffic away from the tunnel.[31] In 1985, the Transport Minister, Lynda Chalker, announced that the number of toll booths would be increased to 12 each way, but concern grew that two tunnels would not be able to cope with the full demands of a completed M25.[32]

Between September 1985 and December 1986, proposals for improvements to the Dartford Crossing underwent several changes,[33] and in 1986, a Trafalgar House consortium won a bid to build a new bridge at Dartford crossing, valued at £86 million.[21] At the time there were several other privately financed projects planned or under construction in the UK, including the Second Severn Crossing. From 1981 until the establishment of the Private Finance Initiatives (PFIs) in the late 1980s, private investment projects were governed by the Ryrie Rules which dictated that "any privately-financed solution must be shown to be more cost-effective than a publicly-financed alternative, and that privately-financed expenditure by nationalised industries could not be additional to public expenditure provision, which would be reduced by the amount of private financed borrowed."[34]

On 31 July 1988, a Private Finance Initiative concession was enabled under the Dartford-Thurrock Crossing Act 1988, which transferred control of the crossing from Kent and Essex county councils to Dartford River Crossing Limited, a private company managed by Rodney Jones.[35] The company would also bear the debt of the bridge, then under construction, "financed 100% by debt, with no equity contribution".[36][lower-alpha 3] The private company was at risk of not recuperating their costs, but ultimately the Dartford scheme demonstrated that the Ryrie Rules were no longer a barrier to the private financing of public infrastructure projects.[38] The concession was scheduled for 20 years from the transfer date, with a stipulation that it could end when debts had been paid off, which was agreed to have been achieved on 31 March 2002.[39] According to the International Handbook on Public-Private Partnership, the chief financing for the project came from a "20-year subordinated loan stock, 16-year loan stock and £85 million as a term loan from banks".[38]

Construction of bridge started immediately after the creation of the PFI in 1988.[40] It was designed by German civil engineer Hellmut Homberg, and the two main caissons supporting the bridge piers were constructed in the Netherlands. Each caisson was designed to withstand a bridge strike of a ship weighing up to 65,000 tons and travelling up to 12mph[41] The bridge deck is about 200 ft high, and it took a team of around 56 to assemble its structure. During construction of the approach road, a World War II bomb was found in its path, which required closure of the entire crossing.[42]

The bridge was opened by Queen Elizabeth II on 30 October 1991.[43] The total cost of construction was £120 million including £30 million for the approach roads.[44] The proposed name had been simply the Dartford Bridge, but Thurrock residents objected and suggested the Tilbury Bridge, leading to a compromise.[42] At the time of opening, it had the longest cable-stayed span of any bridge in Europe.[41] It is the only bridge across the Thames downstream of Central London to be opened since Tower Bridge in 1894.[45]

The Queen Elizabeth II Bridge as viewed from Greenhithe, a mile and a half east of the bridge in Kent