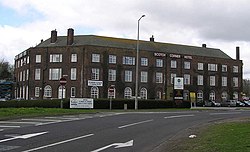 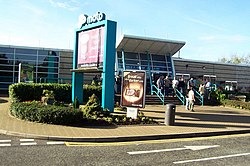 Scotch Corner is an important junction of the A1 and A66 trunk roads near Richmond in the North Riding of Yorkshire. One of the best-known junctions in the country, it is a primary destination signed from as far away as the M6 motorway. The junction's name is derived from the fact that it is the point of divergence for traffic coming from London, the East Midlands, and further south in Yorkshire and wishing to continue either to Edinburgh and eastern Scotland (along the A1) or to Glasgow and western Scotland (by taking the A66).

The A1 leads north towards Edinburgh, and south towards London. The A66 leads north-west towards Penrith and the M6 motorway. There are also two other exits from the junction: the A6108 towards the Yorkshire Dales and Richmond and a minor road to Middleton Tyas and Croft-on-Tees.

The route now called the A66 was once 'the winter road' from Scotch Corner to Glasgow, by way of Carlisle. 'The summer road' runs from Barnard Castle, along Teesdale to Alston, then through Brampton to Gretna. Particularly for cattle droving, the shorter route was advantageous when passable. The Summer Road is one of the most spectacular routes in England. The summer road follows what is now the B6278, B6277, and A689.

The Romans were responsible for building the first roads to meet at this point and the site of the original junction is just a few hundred yards away from the modern day intersection. In AD 71 the Romans took control of the North when they defeated the Brigantes, a Northern Celtic tribe at the Battle of Scotch Corner.

The location remained significant as a staging post with an inn, subsequently becoming a roadhouse in the early days of motorised travel. The £8 million Scotch Corner diversion opened in 1971, which created a grade-separated junction on the A1.

Scotch Corner is notable for the large Scotch Corner Hotel established in 1939, built on the site of a mid-16th century inn. It is also marked by a service station built in 1980 with an attached motel.[1][2] The services offer the usual services such as Costa Coffee, Marks & Spencer, Burger King. W H Smith, a petrol station[3] and an electric vehicle charging station.[4]

Jethro Tull refer to the Scotch Corner in the title track of their 1976 Too Old to Rock 'n' Roll: Too Young to Die! album.