The M67 is a five-mile urban motorway in Lancashire and Cheshire which heads east from the M60 motorway passing through Denton and Hyde before ending near Mottram. It was originally conceived as the first part of a trans-Pennine motorway between Manchester and Sheffield connecting the A57(M) motorway to the M1 motorway; however, the motorway never progressed this far.

Numerous calls have been made to extend the motorway to link Manchester and Sheffield, the second and ninth[1] most populous urban areas within the United Kingdom.[2] Traffic between the cities is mainly divided between the Snake and Woodhead passes, which traverse the Peak District. Plans for a £180m improvement to the route by bypassing Mottram and Tintwistle, the A57/A628 Mottram in Longdendale, Hollingworth and Tintwistle Bypass, and the 'Glossop spur' linking to the A57 road are currently at the public inquiry stage but were 'suspended indefinitely' in January 2008. 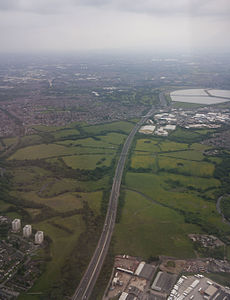 The M67 heads east from the M60 motorway, passing through Denton and Hyde before ending near Mottram. From the end of the motorway traffic can either follow the A628 road or the A57 road further east to the M1 motorway and Sheffield.

Before the motorway reaches its eastern terminal at Hattersley/Mottram roundabout (where traffic continues along the A57 into Longdendale), there are the stub 'ski ramps' where the motorway would have continued eastwards,[3] as there are at the western end.[4]

In 1965 the Ministry of Transport asked Sir William Halcrow & Partners to report on a route selected by the County Surveyor of Cheshire and this led, in stages, to the development of the design to partial urban and partial rural motorway standards.[5] There was a public inquiry in 1967[6] The first section to be opened was the 'M67 Hyde Bypass' which was constructed between 1975 and 1978.[5] M67 Denton Relief Road to the west was constructed between 1978 and 1981.[5] These schemes are connected by a viaduct over the River Tame and Peak Forest Canal.

In 1967, at the time of the first public inquiry there were discussions regarding an extension of the motorway across the Peak District National Park[7] It was to provide a second motorway link across the Pennines to the south of the planned M62 and avoid the Snake and Woodhead passes, which are often closed in snowy weather.

The full proposed route was to start from Manchester city centre at what was the A57(M) motorway eastern terminal roundabout (now a flyover for the A635, constructed in 1995), following the line of the A57 Hyde Road through the inner suburbs of Ardwick, Gorton and Debdale Park. Large-scale demolition took place along the line of the motorway (which is still evident today), tied in with the widening of the Belle Vue and Reddish Lane junctions.[8]

From there the intended route follows the present-day M67, skirting Hyde and Denton. Upon reaching Mottram, the route passed the village to the north (through a tunnel), then crossed Mottram Moor to skirt Hollingworth through the Etherow valley floor. The motorway would then have run around the side of Bottoms Reservoir to reach Hadfield, from which the trackbed of the Woodhead railway line (the former intercity route between Manchester and Sheffield, now closed) was to have been followed up the Longdendale valley to Woodhead. At Woodhead, the route would have diverged, with one carriageway entering the Woodhead Rail Tunnel (now disused) and the other rising on a sweeping viaduct to go over a realigned Woodhead Pass.[8]

Beyond the Pennine watershed, the motorway would have continued on a new alignment past the villages of Langsett and Midhopestones, before meeting the route of the current Stocksbridge bypass.[8]

The Stocksbridge bypass would have been constructed on its present alignment and continued directly onto the M1 at junction 35a.[8]

Another part of the originally planned "M67" exists in Yorkshire, as the A616 Stocksbridge bypass which opened in 1989. As there was no certainty that the whole M67 scheme would be completed by this time, the then government decided that the scheme would not be built with motorway characteristics, but as a single carriageway with crawler lanes.