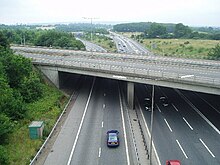 M26 looking east at junction 5. The A21 from Sevenoaks is crossing on the bridge in the foreground.

The M26 is a motorway in Kent providing a short link between the M25 at Sevenoaks and the M20 near West Malling.

The motorway starts at junction 3 of the M20 and heads west, encountering almost immediately the single junction along its length where it has an interchange with the A20. This junction is numbered 2a to reflect its proximity to the M20's nearby junction 2 (also connecting with the A20) a short distance to the north-west.

Eight miles to the west the M26 merges with the M25 at junction 5. There is no exit from the M26 at junction 5 and all traffic must join the clockwise (westbound) M25. The next M25 junction, number 6, is ten miles west at Godstone, thus traffic joining the M26 at Junction 2a cannot leave the motorway for 18 miles – the longest distance between motorway exits in Britain.[1]

Travelling in the anti-clockwise direction from the M25, the main carriageway continues directly onto the M26 at junction 5. To remain on the M25, traffic must turn on to the slip road which connects to the M25 spur coming north from Sevenoaks (Which is the same with the A21). The awkwardness of junction 5 is a result of the history of the two motorways' planning and construction. 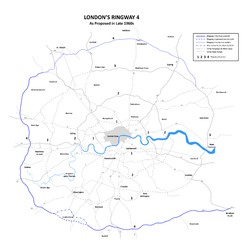 Construction of the M26 began in 1977, although a route on a similar alignment was originally proposed in the Greater London Plan in 1944 as part of proposed post war improvements to London area transport network. Those proposals were developed further in the 1960s as part of the London Ringways plan and the route of the M26 at that time formed part of Ringway 4 and would have been designated as part of the M25.

Construction of the first part of the M25 began in 1972 but before it opened, plans for the London Orbital motorway were modified to combine the southern and western part of Ringway 4 with the northern and eastern part of Ringway 3. To connect the two separate routes, which together were numbered as the M25, an additional section of road needed to be planned and the M25 route was diverted northwards from junction 5 to meet Ringway 3 at Swanley (M25 junction 3).

The remaining section of Ringway 4 became the M26.[2] Until February 1986, the anti-clockwise M25 simply became the M26 at Junction 5, as the M25 between Junction 5 and Junction 3 was not opened until then.

Kent County Council had talks with the Highways Agency over a possible new junction with the A225, allowing direct access to Sevenoaks – or access to the A21 at the M25 junction.[3]