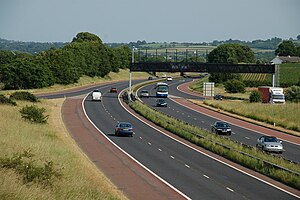 The M1 from the bridge at junction 9

The M1 is a motorway in Northern Ireland. It is the earliest and the longest motorway in Ulster and runs for 38 miles from Belfast to Dungannon through the counties of Down and Armagh. It also forms part of the main route between Belfast and Dublin (by way of the A1 in County Down and the N1/M1 in the Republic of Ireland).

The motorway is designated by the European Commissionas being a part of the unsigned 'European routes' E01 and E18.

The road begins in Belfast at the Broadway roundabout to the west of Windsor Park and running parallel to the Blackstaff River. Heading south as a dual three–lane motorway, it passes to the east of Casement Park before crossing the Belfast-to-Newry railway line.

Running through Dunmurry and Ballyskeagh it arrives to the south of Lisburn. Traffic for Dublin leaves at junctions 7 and 8 as the motorway enters the countryside. Now heading west past Aghnatrisk it runs parallel to and then crosses the Belfast-to-Newry railway line followed by the River Lagan before reaching Moira. Continuing west, it passes between Killaghy and Tullydagan and to the north of Lurgan and Turmoyra, across the Pound River, south of Lough Neagh, before its junction with the M12. Crossing the River Bann it then enters a relatively unpopulated area. It passes south of Derryadd Lough and runs in a loop around the Annagarriff Nature Reserve before crossing the River Blackwater, skirting to the north of Tamnamore and Laghey Corner before ending at Dungannon on the A4.

The line of the M1 in Belfast had been planned for a road since 1946 as the Southern Approach Road, though there were some disagreements on the route.[1] County planners in Armagh had also been working on plans to rebuild the then T3 trunk road which suffered from poor alignments, limited speed limits and was of failing construction, some work on which had been undertaken between 1955 and 1957.[1] These two plans were eventually upgraded into plans for the M1 by 1958. Construction began 1957 on the first bridge and subsequently the first section of the motorway.[1] In 1964, the Northern Ireland Government announced plans for an extensive route of motorways which saw the M1 now planned to go to Dungannon.[2] The M1 is the only motorway in Ulster completed to its full, originally planned length.

The road was constructed in stages between 1962 and 1968.[3] At the end of 1965 UK Transport Minister Tom Fraser and his successor Barbara Castle imposed a blanket 70 mph speed limit on motorways in Great Britain, but the recently constructed Northern Ireland M1 remained free of a blanket speed limit for several years.[4]

The motorway follows the route of the former Lagan Canal between junctions 2 and 6. The first user of the road was a motorcyclist, Robert McFall of Belfast. The section between Junctions 1 and 3 was subsequently widened to three lanes in each direction.

Junctions 12 to 15 were constructed across a peat bog which is up to 39 feet deep, which required the removal of {{convert|3.4 million of peat@.[1]

Several junctions were omitted from the original construction, as these were for future planned motorways, some of these have now been used for other road plans:

By the mid 2000s the M1 in Belfast had high traffic flows at peak times and suffered from congestion. To relieve this work commenced early in 2006 to replace the roundabout at junction 1 with a fully grade separated junction through which the M1 now flows directly onto the A12 Westlink dual-carriageway.[6] As part of the scheme, the M1 was widened from two to three lanes in each direction between Junctions 1 and 2 along with part of the Westlink.

Work was also carried out on the A4 which begins at the terminus of the M1 between Dungannon to Ballygawley (approximately 12.5 miles) was upgraded to dual carriageway standard,[7] opening in November 2010.

In 2006, the government announced plans for a £45m flyover link directly to and from the A1 and M1 eastbound. Construction was initially estimated to take place between 2010 and 2015.[8] As of December 2010, the scheme had a projected 2018 completion year.[9] In 2011 the government announced plans for two service areas in each direction between junction 3 and junction 6 near Ballyskeagh. These service stations will be the first motorway service stations in Northern Ireland. They will include petrol stations and restaurant facilities. Construction began on the westbound service area in November 2013 and no work has not yet began on the eastbound service area. The government also have plans to add west facing slip roads at junction 3. Junction 3 opened in 1988 with only east facing slip roads. Construction on the west facing slip roads is expected to be completed by 2018.