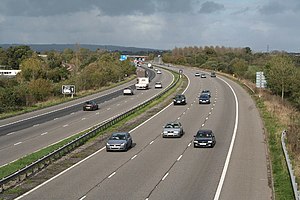 The M5 near Cullompton, Devon

The M5 is a motorway 163 miles long, running from Exeter in Devon to West Bromwich in the Staffordshire Black Country. The M5 defies the London-centred road network, running somewhat perpendicular to the London-bound roads, linking the West Country directly to the western Midlands, linking into a smaller hub of routes around the conurbation of Birmingham and the Black Country.

Its route, according to junction numbers, begins north of West Bromwich in Staffordshire, where it meets Junction 8 of the M6, and then heads south through the Black Country, the Midlands and on to end south of Exeter in Devon.

Heading south-west, the M5 runs east of West Bromwich and west of Birmingham through Sandwell Valley. Junction 1 surrounds a surviving gatehouse from the former Sandwell Hall. It continues past Bromsgrove in Worcestershire (and from Birmingham and Bromsgrove it is part of the Birmingham Outer Ring Road).

Leaving the towns, it enters rural Worcestershire, passing Droitwich Spa and Worcester, then into Gloucestershire, where it passes Tewkesbury, Cheltenham, Gloucester and Bristol.

North of Bristol the M4 crosses the M5 (at Junction 15) in a remarkable junction system. Junction 15 is a large four-level stack interchange, called the Almondsbury Interchange, designed to cope with traffic joining the heavy traffic of the M4.

Soon afterwards the M5 passes between Bristol itself and Avonmouth, leaping over the Avon and into Somerset on a long viaduct providing wide views over Avonmouth's docks and the broad estuary of the Severn. This, the Avonmouth Bridge, between Junctions 18 and 19, is often a bottleneck during heavy traffic periods, due mainly to lane drops at either ends of the bridge for the respective junctions, and the sharp angle in the centre of the bridge, which causes larger vehicles to slow considerably.[1]

Entering Somerset, there are split-level carriageways where the M5 ascends the hill sides above the Gordano Valley, between Portishead, Junction 19 and Clevedon, Junction 20.

Between Junction 21, Weston-super-Mare and Junction 22, Burnham-on-Sea, the M5 passes by an isolated landmark hill called Brent Knoll. The Willow Man sculpture, visible from both carriageways, acts as a landmark just to the south of Junction 23.

The M5 follows the route of the A38 road quite closely. The two deviate slightly around Bristol and the area south of Bristol from Junctions 16 to the Sedgemoor services north of Junction 22. While the A38 goes straight through the centre of Bristol and passes by Bristol Airport, the M5 skirts both. The A38 also continues south into Devon, and joins the motorway's terminus at Junction 31, near Exminster.

In Somerset, the M4 passes Weston-super-Mare, Bridgwater and Taunton and eventually joins the Culm Valley into Devon, eventually concluding its journey at Exeter.

The first 26 miles of the M5 motorway to be built were constructed as a dual two-lane motorway (two lanes in each direction) This section, from Junction 4 (Lydiate Ash) in the north to a trumpet junction with the M50 in the south, opened in July 1962.[2] The southern end was called a trumpet junction because of its shape: a 270-degree curved bend. There were no other exits from this trumpet junction though room was left for an extension to the south.

The two-mile dual two-lane section between Junctions 16 and 17 built at Filton, near Bristol, was also opened in 1962, and was intended to replace the pre-war Filton bypass.

North of Junction 4, into the Black Country, the M5 was constructed in sections, from 1967 to 1970, together with the Frankley services. Much of the northern section beyond Junction 3, from about Quinton to the junction with the M6 motorway, was constructed as an elevated dual three-lane motorway using concrete pillars.[3]

The M5 was also extended southwards, in sections, from 1967 to 1977, through Somerset, to Exeter in Devon as a dual three-lane motorway,[3] together with the Strensham services. The short section between Junctions 27 and 29 was built between 1967 and 1969 as the A38 Cullompton Bypass, with the intention that it should become part of the M5.[2] The termini for this section have since been removed, although part of the southern terminal roundabout is now used as an emergency access.[4] The section was developed to motorway standards, and incorporated into the M5 in 1975.[2]

In the late 1980s Junction 4a was built as part of the M42 motorway construction project. The route of the M42 was decided as early as 1972 but, owing to planning delays, the short section of the M42 north of Bromsgrove did not open until 1989.[5]

The first-built section of the M5, from Junctions 4 to 8, was widened to provide six lanes (three lanes in each direction) in the early 1990s. During this work the northbound Strensham services was rebuilt further away from the new junction. Junctions 7 and 8 were also remodelled into a roundabout junction.[6] 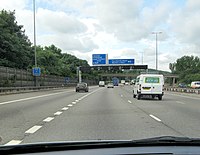 The M5 motorway south of the Avonmouth Bridge

The Avonmouth Bridge was converted to eight lanes (four lanes in each direction) in the early 2000s. Later, in 2005–2006, parts of the M5 between Junctions 17 and 20 were widened to seven lanes (four lanes climbing the hills and three lanes descending the hills); variable message signs were added and parts of the central reservation was converted to a concrete step barrier. During this stage of construction the M5 became Britain's longest contraflow system,[7][8] spanning 9 miles between Junctions 19 and 20. The M5 contraflow was said to be the most complicated ever built in the UK as the motorway is on a split level around the steep hills of the Gordano Valley; meaning four lanes plus an additional emergency vehicle lane were squeezed into that section.[9]

In 2002 extended exits for Junction 12 were constructed. The Highways Agency did not anticipate the traffic flows through the junction and the resultant queues can now extend back onto the motorway,[10] because of an increase in traffic from Stroud intending to use the M5 northbound. The distance from Junctions 12 and 13 is similar and traffic congestion is heavy on the A419 towards Junction 13 whereas it is usually lighter on the B4008 towards Junction 12. As traffic leaving the M5 northbound towards Gloucester needs to give way to this traffic coming from the B4008, the queue on the motorway can extend beyond the first sign for the junction.