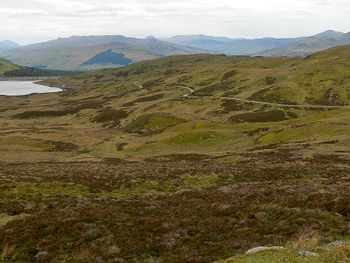 The Rob Roy Way near Killin

The Rob Roy Way is a long distance footpath 96 miles long in the southern Highlands, that runs from Drymen in Stirlingshire to Pitlochry in Perthshire.

The path was created in 2002 and takes its name from the famous outlaw Rob Roy MacGregor, a folk hero of the early 18th century. The route traverses countryside that he knew and travelled frequently.[1] The route runs about the south of the Highlands, crossing the Highland Boundary Fault (which some take to mark the southern boundary of the Highlands. Views from the trail overlook Loch Lubnaig, Loch Earn, Loch Venachar and Loch Tay.[1]

The way is 79 miles in length if the direct route along the southern shore of Loch Tay and the River Tay is followed between Ardtalnaig and Aberfeldy. An optional loop also links these places by way of Amulree: choosing this option increases the length by a further 17 miles to 96 miles.[2]

Between Drymen and Pitlochry, the way passes through Aberfoyle, Callander, Strathyre, Killin, Amulree and Aberfeldy.[3]

The Rob Roy Way links to two further 'Great Trails', meeting the Great Trossachs Path near Callander, and the West Highland Way just north of Drymen. The Rob Roy Way also shares sections of route with Route 7 of the National Cycle Network, which also links Drymen and Pitlochry.[4] Shared sections include the minor road on the south side of Loch Tay and the section following the route of the former Callander and Oban Railway, including Glen Ogle viaduct.