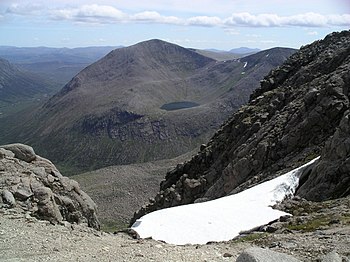 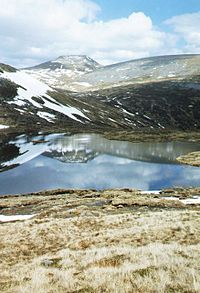 The Cairngorms are a dramatic mountain range in the eastern Highlands. The range is named after the mountain amongst them which is most prominent from Speyside, namely Cairn Gorm. Nevertheless, Cairn Gorm is not the highest of the mountains, which honour belongs to Ben Macdhui, a file miles to the south.

Most of the Cairngorms are within Aberdeenshire but stretch reaching into Inverness-shire in the west, and Banffshire in the north: the highest points are on the borders of all three shires.

Though a compact group, the Cairngorms are grand mountains. The range contains 18 Munros, mountains over 3,000 feet, and 31 subsidiary Munro tops. These are some of the highest mountain in the British Isles and amongst them are the 2nd, 3rd, 4th, 5th and 6th highest mountains in Britain.

The Cairngorms are known in Gaelic as Monadh Ruadh ("the Red Hills"). The English name "Cairngorms" is taken from that of Cairn Gorm itself. Adam Watson in 1975 refers to both names and explains that the range's former name is Am Monadh Ruadh - the red hills distinguishing them from Am Monadh Liath – "the grey hills - to the west of the River Spey.

If you look from Aviemore on a clear evening, the granite screes of Lairig Ghru and Braeriach do glow a warm red in the sun. The name Am Monadh Ruadh still lives among the oldest folk of Strath Spey, but long ago, outsiders had replaced it with 'the Cairngorms', on maps and in guide books
—Watson (1975)

There is an amusing clash between the Gaelic and English names, for Cairn Gorm means Blue Cairn but "Monadh Ruadh" means "Red Hills".

Alexander in 1928 refers to a Sporting Tour by Colonel T Thornton, who visited the area in 1786. Colonel Thornton refers to the range as the Cairngorms, and Alexander writes:

The use of the term "Cairngorms" as applied to the group must have become well established early in the nineteenth century, for we find it in Col Thornton's Sporting Tour (1804), where there is a reference to "Aurora peeping over the immense Cairngorms"
—Alexander (1928) (p21)

Both Alexander (1928) and Watson (1975) appear to suggest that Colonel Thornton's book was the first time the term Cairngorms was used in print to refer to whole group.

Arguments over the name of the Cairngorms range are fought out with strong emotional reactions amongst those who regard the mountains with affection. As far as we can tell, the mountains themselves have no opinions on the matter. 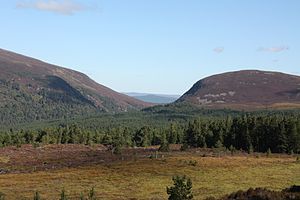 View to the Cairngorms

The Cairngorms' massif rises up swiftly from Speyside and the Dee. Watson (1975) delineates the main Cairngorm massif as being between Aviemore in the north-west, Glen Gairn, Braemar in the south-east, and Glen Feshie in the south-west.

To the south of the Cairngorms are a separate distinct range, the Grampians. Watson (1975) describes the latter as running from Drumochter in the west almost to the sea just south of Aberdeen, continuing:

Some map-makers have confused the issue by printing 'Grampians' over the Cairngorms and Strath Don hills as well! As it has often been used on maps to take in the Ben Alder and Perthshire hills far to the west of our area, it is unsuitable for this book.
—Watson (1975)

Gordon (1925) draws the area of the Cairngorms even more tightly: the end-papers show a map where Aviemore, River Feshie, River Dee and Creag Choinnich just make it onto the map, and Glen Geldie, and Glen Gairn do not.

Although not strictly a single plateau, the Cairngorms give the sense of being a single plateau, because the passes that cut through them are not very deep. Adam Watson gives the summit of Lairig Ghru as 2,743 feet, and the summit of Lairig an Laoigh at 2,428 feet, and The Sneck at 3,182 feet. Topographically, this means a walker could cross between the Cairntoul (4,242 feet) – Braeriach (4,252 feet) massif to the Ben Macdui (4,295 feet) – Cairn Gorm (4,082) massif and onto the Beinn a' Bhùird (3,927 feet) – Ben Avon (3,878 feet) massif without descending below the 2,428-foot summit of the Lairig an Laoigh.

The Cairngorms feature the highest, coldest and snowiest plateaux in the British Isles and are home to five of the six highest mountains in Britain. The Munros, the mountains over 3,000 feet, are:

Ten of these mountains are amongst the twenty highest peaks in Britain.

After she had climbed to the top of Ben Macdhui on 7 October 1859, Queen Victoria wrote:

It had a sublime and solemn effect, so wild, so solitary — no one but ourselves and our little party there . . . I had a little whisky and water, as the people declared pure water would be too chilling.

The Cairngorms hold some of the longest-lying snow patches in Scotland. The area is sparsely populated due to the extreme nature of the climate. Snow patches can remain on the hills until August or September, while in the Garbh Coire Mòr of Braeriach the snow melted just five times in the last century. In the last few years, however, the quantity and longevity of Cairngorm snow patches has declined significantly. The lowest recorded temperature in the United Kingdom has twice been recorded in the Cairngorms, at Braemar, where a temperature of -27.2°C, was recorded on 11 February 1895 and 10 January 1982. The greatest British wind speed 150 knots (170 mph)was recorded on Cairngorm Summit on 20 March 1986,[1] where speeds of over 100 mph are common.

The Cairngorms and their neighbours represent a major barrier to travel and trade across Scotland and helped to create the remote character of the Highlands that persists today. Passes through the hills such as the Lairig Ghru were extensively used by drovers in the 19th Century herding their cattle to market in the Lowlands, from their smallholdings in the Highlands.

The region is drained by the Rivers Dee and Spey, and by the latter's two tributaries: the Rivers Feshie and Avon.

There are no public roads through the Cairngorms. All the public roads in the general area either skirt the range or stop short, providing access to them only. Historically pedestrians have been able to cross the Cairngorms by following the traditional routes of the Lairig Ghru, and the Lairig Laoigh, or around them by following Glen Dee, Glen Feshie, and Bealach Dearg.

From the south, and south-east motorised access ends at Linn of Dee, or Allanaquoich. From the north-west it ends at Coylumbridge or the car park at the Cairn Gorm ski area.

The Cairngorms were formed 40 million years before the last ice age, when slight uplift raised an eroded peneplain based on an exposed granite pluton. The highest present-day peaks represent eroded monadnock hills. During the ice ages the ice caps that covered most of northern Scotland remained static, frozen to the ground for long periods and actually protected the rounded summits and valleys and deep weathered granite of the mountains of the area. Glacial erosion is represented in deep valleys which dissect the area.

Many valleys are littered with glacial deposits from the period of glacial retreat. The most famous valley is the Lairig Ghru pass, a gouge through the centre of the mountains - a u-shaped valley, now partly filled with extensive scree produced by intense frost action during ice-free periods. Many parts of the Cairngorms exhibit classic periglacial weathering which occurred during cold periods in ice-free areas.[2][3] 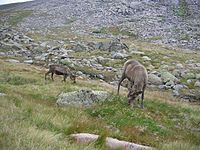 The area also contains ancient woodland, one of the last major areas of such ancient woodland its kind in the British Isles, which is a remnant of the Caledonian Forest. Much of the remains of this forest are found within the Cairngorms National Park. The forest is home a rich variety of Highland wildlife.

Of particular fame is the RSPB (Royal Society for the Protection of Birds) reserve at Abernethy Forest and Loch Garten. A famous pair of Ospreys are present in the summer months, and they often attract large crowds to see them. The forest is home to the endangered Capercaillie and endemic Scottish Crossbill.

Red Deer, Roe Deer, Mountain Hare, Pine Marten, Red Squirrel, Wild Cat and Otter are all present, as well as the only herd of Reindeer in the British Isles. They now roam the high Cairngorms, after being re-introduced in the 1950s by a Swedish herdsman. The herd is now stable at around 50 individuals, all born in Scotland.

A skiing and winter sports industry is concentrated in the Cairngoms, with three of Scotland's five resorts situated here. They are the Cairn Gorm Ski Centre, Glenshee Ski Centre and The Lecht Ski Centre.

A funicular railway opened here in late 2001, running from a base station at 2,090 feet up to the Ptarmigan Centre, situated at 3,600 feet, about 150 yards from the summit of Cairn Gorm. It was built amidst some controversy, with supporters of the scheme claiming that it would bring valuable tourist income into the area, whilst opponents argued that such a development was unsuitable for a supposedly protected area.

The mountains are also very popular for hill-walking, winter sports, birdwatching, climbing, deer stalking, gliding and fly fishing. However, the area can be very hazardous at times, with dangerous and unpredictable weather conditions. Because of this, all safety precautions must be taken whilst out in the mountains.

The area has long attracted ice climbers, especially to the northern corries. It boasts what was reputedly the world's hardest ice climb "The Hurting" Grade XI.

In 1964, physicist Peter Higgs of Edinburgh was walking in the Cairngorms when he had his famous idea about symmetry-breaking in the electroweak theory, now a key element of the standard model of particle physics. The search for the Higgs boson is intended to prove this theory. 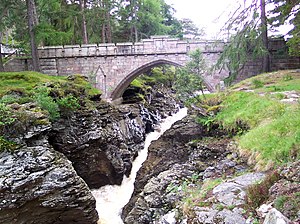 The Linn of Dee near Braemar

The Cairngorms National Park covers an area of 1,748 square miles, all together a spectacular landscape spread over a large upland plateau. It has been declared a "Category 5 protected landscape" (a "sustainable development area") that has farmed and managed landscapes in which tourism is encouraged.