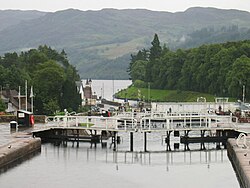 The Caledonian Canal in Fort Augustus

Fort Augustus is a village in the heart of the Great Glen, in the parish of Boleskine and Abertarff in Inverness-shire. It is found at the south west end of Loch Ness. The village had a population of around 646 in 2001, and its economy is heavily reliant on tourism.

Until the early 18th century, the village was called Kiliwhimin. It was renamed 'Fort Augustus' after the Jacobite Rising of 1715, when a new fort was built here to secure the Great Glen.

The name 'Kiliwhimin' is from the Gaelic Cill Chuimein (which remains the Gaelic name for the village) and its accepted etymology is that the village was named after Saint Cummein of Iona who built a church there.[1] Other suggestions are that it was originally called Ku Chuimein after one of two abbots of Iona of the Comyn clan or that it was called Cill a' Chuimein ("Comyn's Burialplace") after the last Comyn in Lochaber.[2]

After the Jacobite rising of 1715 had been put down, General Wade built a fort (taking from 1729 until 1742) which was named after the Prince William Augustus, Duke of Cumberland. Wade had planned to build a town around the new barracks and call it Wadesburgh.[3] The settlement grew, and eventually took the name of this fort. The fort was captured by the Jacobites in April 1745, just before the Battle of Culloden.

In 1867, the fort was sold to the Lovat family, and in 1876 they passed the site and land to the Benedictine order. The monks established Fort Augustus Abbey and later a school. The school operated until 1993 when it closed owing to changing educational patterns causing a decline in enrollment. The monks employed Tony Harmsworth[4] to devise a rescue package which saw the site converted into the largest private heritage centre in the north, which operated between 1994 and 1998,[5] however the heritage centre failed to generate sufficient profit to maintain the buildings. In 1998 the monks abandoned the site, and it reverted to the Lovat family which in turn sold it to Terry Nutkins. He also owned the Lovat Hotel[6] that stands on the site of the old Kilwhimen Barracks, one of four built in 1718. This site houses the west curtain wall of the old Fort, intact with gun embrasures. The Lovat was originally built as the local Station Hotel.

The village was served by a rail line, the Invergarry and Fort Augustus Railway, from Spean Bridge to ‘Fort Augustus Pier’, a terminus on the banks of Loch Ness from 1903 until 1933. The line was built by the North British Railway, but initially operated by the Highland Railway.

The Caledonian Canal connecting Fort William to Inverness passes through Fort Augustus in a dramatic series of locks stepping down to Loch Ness.

The village is served by the Cill Chuimein Medical Centre.[7]

The village has both a primary school and a secondary school – Kilchuimen Primary School and Kilchuimen Academy – which share a campus.