Milngavie is a town in Stirlingshire, on the Allander Water, at the north-western edge of Greater Glasgow, and about six miles from Glasgow city centre. It neighbours Bearsden in Dunbartonshire.

Milngavie is a commuter town, with much of its working population travelling to Glasgow to work or study. The town is served by Milngavie railway station on the North Clyde Line, which links it to Central Glasgow. The town is also a very popular retirement location, with an unusually high proportion of elderly. In the 2001 the town had a population of 12,795 in 5,256 households.

Although Bearsden and Milngavie are in close proximity, the social histories of these two towns differ significantly. Bearsden grew almost exclusively as a dormitory town of Glasgow for the wealthy and professional classes. In that sense both towns now fulfil a similar role.

Currently Milngavie is perhaps best known as the start of the West Highland Way long distance footpath which runs northwards for 95 miles to the town of Fort William. A granite obelisk in the town centre marks the official starting point of the footpath.

The name of the town is pronounced locally without the "v". The origin of the name is also unknown, and one of those tussled over between those who claim a Gaelic origin for every piece of earth where a Gael might once have wandered and those who would banish that tongue to the isolated glens of the north.

Records in Scots have many variants. Amongst the Records of the Parliament of Scotland it appears as Mylnedavie, Mylnegaivie, Milnegaivie and Milngaivie.[1] Joan Blaeu's Atlas of Scotland shows some spellings for well-known places which might indicate some of their origins or at least the pronunciation that Blae heard, and on his maps Milngavie is shown as Milgay. It may mean "Mill of Guy".[2] An alternative suggestion is that the original translation meant "Gavin's Mill", and indeed Gavin's Mill remains in the town centre to this day.

Although known today as a dormitory suburb of Glasgow, the town grew from a country village within the parish of New Kilpatrick to a minor industrial centre in the nineteenth century with paper mills and bleach works on the Allander River to the north east of the town centre. Some remnants of this industry remain today on the Clober Industrial Estate.

Stone-built villas and semi detached houses were constructed for wealthy citizens to the east of the town centre and around Tannoch Loch when commuting to Glasgow was made possible by the opening of the railway which reached the town in 1863.

After Second World War a local authority housing scheme was built to the west of the town centre, housing many people relocated from Clydebank which had been badly bombed. The town grew with the addition of private speculative housing developments of bungalows and semi-detached homes at South Mains to the south of the town centre and around Clober, to the west, in the 1950s and 1960s. The Fairways estate was built in the 1980s.

In the early 1980s, the town centre was redeveloped to improve traffic flow and pedestrian safety. The central commercial streets were pedestrianised and many buildings replaced. A superstore was opened on the fringes of the town centre in the 1990s.

Residents launched a "tongue in cheek" campaign to bring the Olympic games to Milngavie in 2020.[3]

Little remains of the pre-nineteenth century village other than the Corbie Ha' meeting hall, Cross Keys Public House and the Gavin's Mill water mill on the Allander River along with Barloch House and Barloch Farm.

There are a few good examples of nineteenth century stone villas along the Station Road as well as the well preserved nineteenth century railway station. Many interesting Victorian houses around the Tannoch Conservation Area show Scottish cottage, Scottish Baronial, Classical architecture and Gothic Revival architecture|Gothic influences. The town centre and Strathblane Road have remaining Victorian shop/tenement buildings and a few Arts and crafts influenced commercial buildings. Craigmillar Avenue and the area around Baldernock Road have some large Arts and Crafts and Glasgow Style influenced houses.

The bulk of the housing stock is twentieth century, showing Scottish vernacular influences such as harling or rough-casting, and, occasionally, more traditionally English elements like black and white timber panelled dormer windows and gables.

The public sheltered housing projects of the 1970s and 1980s are interesting for their attempts to use traditional local materials like grey rough-cast and slate plus interesting rounded walls and pitched roofs.

The most recent development is characterised by some interesting one-off conversions and extensions to Victorian properties; new housing by developers that often follows standard brick-built box designs, and steel-framed commercial and leisure buildings. 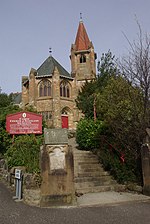 Milngavie has three stone-built churches dating from the early twentieth century within 500 yards of each other. Up until the 1970s these three were all Church of Scotland congregations: St Paul's, Cairns, and St Luke's, resulting from the Great Disruption which sundered the Kirk until reunion in the 1920s. St Paul's was always in the fold of the Church of Scotland and is the parish church of Milngavie. It was originally housed in a simple grey stone church building above the Station Road beside the Milngavie Primary School before moving to a handsome red sandstone building on the Strathblane Road in 1906. The original building is now apartments. Since 1799 Cairns Church had been located in a building on Mugdock Road close to the 'preaching braes' on Barloch Moor where the congregation's first services had taken place. It moved to its present building on Buchanan Street in 1903 which displays elements of the Glasgow Style of architecture and design.

St Luke's had been built as the Milngavie United Free Church. In the 1970s it was decided that the concentration of churches in one area should be reviewed and a new St Lukes was built on the western side of the town to serve the residents of Clober.

Rangers FC has its professional training facility at Auchenhowie Road in the east of the town.

Due to the town's suburban and residential profile, it is home to many sporting clubs and facilities.