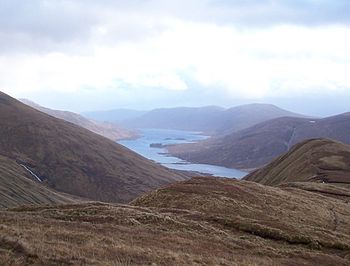 Loch Cluanie and Beinn Loinne from Meall a' Charra

Loch Cluanie is a freshwater loch in the Highlands, on the border of Inverness-shire with Ross-shire. It lies at the top of Glenmoriston, the valley of the River Moriston, fed by a burn named the River Cluanie and drained by the Moriston.

The loch is a couple of miles east of the famous Glen Shiel and just over the watershed: though only eight miles from the west coast's sea shore at Shiel Bridge, Loch Cluanie drains to the east coast, through the River Moriston which discharges into Loch Ness.

The loch serves as a reservoir, contained behind the Cluanie Dam, which was built by Mitchell Construction and completed in 1957 as part of the North of Scotland Hydro-Electric Board's Glenmoriston project to generate hydroelectricity.[1]

Several high mountains overlook the loch as it lies amongst the Glen Shiel Hills; close by the north shore rises Càrn Ghluasaid, at the beginning of the North Glen Shiel ridge (and which summit also marks where the county boundary crosses the waist of the loch). The South Glen Shiel range ends its ridge at Druim Shionnach by the south shore.

The A87 road runs along the north edge of the loch. 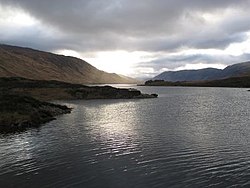 Loch Cluanie from the dam near the Cluanie Inn

The hamlet of Cluanie is on the west side of the loch. It has a car park, the Cluanie Inn and two houses which are used as holiday homes by their owners.

The Cluanie Inn is the site of a weather station.[2] It is also at or near the start/end points of several walks into the neighbouring hills, which include several Munros.[3]

Cluanie Lodge (NH097109) is a private dwelling owned by the estate and land owner, which is the primary residence of the owner, on the south-west corner of the loch. The dwelling had been extensively renovated over five years prior to it becoming the owner's main residence. The richly vegetated areas at the side of the loch are home to small birds such as the willow warbler and the wren.