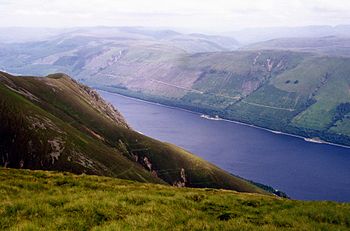 The Great Glen also known as Glen More (from the Gaelic An Gleann Mòr) and on occasion as Glen Albyn (Gleann Albainn - the Glen of Scotland) or is a long, deep glen slicing though the Highlands from coast to coast in a straight line for over sixty miles. The Great Glen has its whole length in Inverness-shire apart from at the extreme western seaward end, where Morven, part of Argyllshire, sits on part of the north shore.

The Glen cuts from Inverness on the Moray Firth, to Fort William at the head of Loch Linnhe. It follows a large geological fault known as the Great Glen Fault. It bisects the Highlands into the Grampian Mountains to the south-east and the Northwest Highlands to the north-west.

The Great Glen Fault is a massive geological fault line: a long strike-slip (transcurrent) fault that runs through the Great Glen.

However, the fault is actually much longer than the glen and over 400 million years old. The fault continues south-west beyond Great Britain to create Lough Foyle (between the counties of Londonderry and Donegal) and the valley of the River Foyle, and Donegal Bay and Clew Bay on the Atlantic coast of Donegal.

It is an ancient fault, apparently predating the world’s current continents, and can be traced also in North America.

The fault formed in the period associated with the collision between the Laurentia and Baltic tectonic plates (late Silurian / early Devonian period) and may 430 to 390 million years old. The second main phase of movement was during the Carboniferous age. The Fault had its final phase of movement during the Late Cretaceous to Early Tertiary. It is estimated that the north of Scotland moved 64 miles.

The fault is mostly inactive today, but occasional moderate tremors have been recorded over the past 150 years.

Routes along the Glen 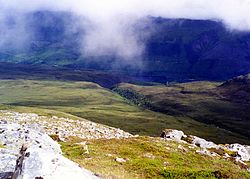 The Glen is a natural travelling route in the Highlands. Most of the glen is filled with water; its series of lochs, the firth at its western mouth (Loch Linnhe) and the River Ness at the east. The Caledonian Canal joins the lochs to provide a navigable route through the midst of the Highlands from coast to coast

The A82 road follows the Great Glen, linking the city of Inverness on the east coast with Fort William on the west coast. The Invergarry and Fort Augustus Railway was built in 1896 from the southern end of the glen to the southern end of Loch Ness, but was never extended to Inverness. The railway finally closed in 1947.

A recent development has been to open a long-distance route for cyclists and walkers. Called the Great Glen Way it links Fort William to Inverness[1]. Clearly marked along the way, connecting a series of footpaths, forestry tracks, canal paths with the occasional stretch of road The Great Glen Way was officially opened on the 30th of April 2002 by H.R.H. Prince Andrew, Earl of Inverness.

The Great Glen was strategic importance in controlling the Highland Scottish clans, particularly around the time of the Jacobite uprisings of the 18th century, is recognised by the presence of the towns of Fort William in the south, Fort Augustus in the middle of the Glen, and Fort George, just to the north of Inverness.

Much of the Glen is taken up with a series of lochs, with rivers connecting them. The Caledonian Canal also uses the lochs as part of the route, but the rivers are not navigable.

From north-east to south-west, the natural water features along the Great Glen are:

The watershed between east and west lies between Loch Oich and Loch Lochy.

Loch Linnhe to the south of Fort William is a sea-loch into which both the River Lochy and Caledonian Canal emerge. At the north end, the River Ness empties into the Moray Firth.