From Wikishire
(Redirected from Highlands of Scotland)
Jump to: navigation, search 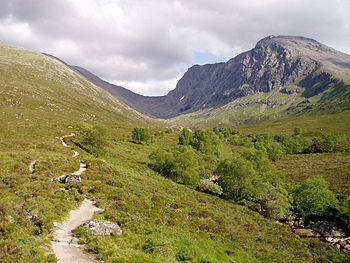 Ben Nevis from the path alongside the Allt a' Mhuilinn 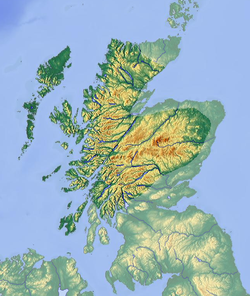 The Highlands are a region of northern Great Britain, wholly within Scotland, of distinctive cultural heritage born of its remoteness from town life, its unique geography and history. The Highlands were culturally quite distinct from the rest of Britain from the later Middle Ages into the modern period, when English and Lowland Scots replaced Gaelic throughout most of the Highlands.

The area is very sparsely populated and its many mountain ranges dominate the region. The Highlands include the highest mountains in the British Isles, the highest of all being Ben Nevis. Before the 19th century the Highlands were home to a much larger population, but due to a combination of factors including the breaking of the traditional Highland way of life following the Jacobite Rising of 1745, the potato famine, the Highland Clearances, and mass migration to urban areas during the Industrial Revolution, the area is now one of the most sparsely populated in Europe. The average population density in the Highlands and Islands is lower than that of Sweden, Norway, Papua New Guinea and Argentina.

The Highlands are hard to define tightly. The include a great part of many counties but only Sutherland, Ross-shire, Inverness-shire and Argyllshire could be considered wholly Highland counties; Caithness, which is usually included, is in truth the land beyond the Highlands, largely an area of coast and low-lying bog perhaps having more in common with Orkney than the Highland shires.

At the most extensive, the Highlands may be the whole of Great Britain north of Stirling. Geologists use it as a distinction for the land north and west of the Highland Boundary Fault, a geological fault which runs from Stonehaven in Kincardineshire on the east coast to Helensburgh in Dunbartonshire on the Clyde. Plain geographers look at the geographical highland zone, drawing the Highlands north and west of the eastern coastal plains running from the Tay around to Inverness. The latter matches fairly well the cultural extent of the Highlands, for the coastal towns were in past days heavily settled by those of English tongue and Anglo-Saxon descent, while the trackless hills and glens were a stronghold of the Gael.

The Gaelic name A' Ghàidhealtachd literally means 'the place of the Gaels' and traditionally, from a Gaelic-speaking point of view, includes both the Highlands and the Hebrides.

A much wider definition of the Highlands is that used by the Scotch Whisky industry. Highland Single Malts are produced at distilleries north of an imaginary line between Dundee and Greenock.[1]

Inverness is traditionally regarded as the capital of the Highlands,[2] although the Highland parts of Aberdeenshire, Angus, Perthshire and Stirlingshire look more to cities such as Aberdeen, Dundee, Perth and Stirling as their commercial centres. Under some of the wider definitions in use, Aberdeen could be considered the largest city in the Highlands, although it does not share the recent Gaelic cultural history typical of the Highlands proper.

The Highlands, broadly then, encompass parts of the following counties:

Until 1745, the Highland were ruled, if at all, by the clan chiefs who acted as petty sovereigns on the own estates. They gave allegiance to the King but the King's peace barely applied. Clan warfare was constant and bloody and the chiefs felt free to make wars and treaties between themselves without interference. In 1745 however several clan chiefs of the Episcopal party threw in their lot with Charles Edward Stuart, "Bonnie Prince Charlie", and they and their retainers followed him in marching south as far as Derby. After the Highlanders were defeated and butchered at Culloden Moor in 1746, Parliament moved to break the clan system and pacify the Highlands, depriving loyal clans as well as rebels, and thereafter the unique Highland culture has been less distinct, and less bloody. 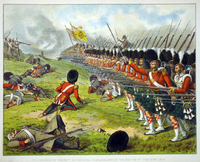 The Highlands before 1800 were very poor and traditional, with few connections to the uplift of the Scottish Enlightenment and little role in the Industrial Revolution that was sweeping the rest of the country.

Religion was a central fact of life. Long after the triumph of the Church of Scotland in the Lowlands, Highlanders clung to an old-fashioned Christianity infused with animistic folk beliefs and practices. The remoteness of the region and the lack of a Gaelic-speaking clergy undermined the missionary efforts of the established church.

The later 18th century saw somewhat greater missionary success, owing to the efforts of the missionaries of the Society for Promoting Christian Knowledge and to the disruption of traditional society after the Battle of Culloden in 1746. In the 19th century, the evangelical Free Churches, which were more accepting of Gaelic language and culture, grew rapidly, appealing much more strongly than did the established church.[4]

The era of the Napoleonic Wars, 1790–1815, brought prosperity, optimism, and economic growth to the Highlands. The economy grew thanks to wages paid by kelping industry (men burned kelp to obtain chemicals from the ashes, used in gunpowder), but also prosperity grew from fisheries, weaving and large-scale infrastructure spending such as the Caledonian Canal project. On the East Coast, farmlands were improved, and high prices for cattle brought money to the community. Service in the Army was also attractive to young men from Highlands, who sent pay home and retired there with their army pensions.[5]

The prosperity ended after 1815, and long-run negative factors began to undermine the economic position of the poor tenant farmers or "crofters," as they were called. The adoption by the landowners of a market orientation in the century after 1750 dissolved the traditional social and economic structure of the north-west Highlands and Hebrides Islands, causing great disruption for the crofters. The Highland Clearances and the end of the township system followed changes in land ownership and tenancy and the replacement of cattle by sheep. The potato blight that caused the Great Famine in Ireland struck the Highlands too in 1846, causing great distress.

Using a complex form of chain migration, many Highlanders migrated out. Clan leaders would designate which young people should emigrate, where to, and in which order. The first arrivals would prepare the way for their kinsmen who continued to arrive in the chain migration.[6] The emigration had been going on since before the Clearances however. Johnson, travelling in 1773, reported:

In the evening the company danced as usual. We performed, with much activity, a dance which, I suppose, the emigration from Sky has occasioned. They call it ‘America’. Each of the couples, after the common involutions and evolutions, successively whirls round in a circle, till all are in motion; and the dance seems intended to shew how emigration catches, till a whole neighbourhood is set afloat. [7]

Resistance to the Clearances

In the nineteenth century the unequal concentration of land ownership became an emotional subject and eventually became a cornerstone of liberal radicalism. The poor crofters (tenant farmers who rented a few acres) were politically powerless, and in the first half of the century they embraced the popularly oriented, fervently evangelical Presbyterian revival after 1800.[8] Most joined the breakaway "Free Church" after 1843. This evangelical movement was led by lay preachers who themselves came from the lower strata, and whose preaching was implicitly critical of the established order. The social change energised the crofters and separated them from the landlords; it helped prepare them for their successful and violent challenge to the landlords in in the 1880s through the Highland Land League.[9]

Violence erupted starting on the Isle of Skye when Highland landlords cleared their lands for sheep and deer parks. It was quieted when the government stepped in passing the Crofters' Holdings (Scotland) Act, 1886 to reduce rents, guarantee fixity of tenure, and break large estates up to provide crofts for the homeless.[10] The crofters of the Highlands were in much the same position as the Irish peasantry whose resistance became the Irish Land War at the same time, but while the Irish were intensely politicised through roots in Irish nationalism, the political dimensions were limited in the Highlands. In 1885 three Independent Crofter candidates were elected to Parliament, which listened to their pleas. The results included explicit security for the Highland smallholders; the legal right to bequeath tenancies to descendants; and creating a Crofting Commission.

The Crofters as a political movement faded away by 1892, and the Liberal Party gained their votes.[11] 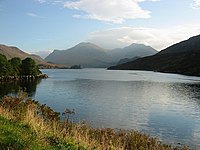 Religion continues to play an important role in Highland culture, with Sabbath observance still widely practised, particularly in the Hebrides.

The Scottish Reformation achieved partial success in the Highlands. Roman Catholicism remained strong in some areas, owing to remote locations and the efforts of Franciscan missionaries from Ireland, who regularly came to celebrate Mass. Although the presence of Roman Catholicism has faded, there remain significant Romanist strongholds within the Highlands and Islands such as Moidart, Morar, South Uist and Barra in the southern Outer Hebrides.

There have been trackways from the Lowlands to the Highlands since prehistoric times. Many traverse the Mounth, a spur of mountainous land that extends from the higher inland range to the North Sea slightly north of Stonehaven. The most well known and historically important trackways are the Causey Mounth, Elsick Mounth,[12] Cryne Corse Mounth and Cairnamounth.[13]

Johnson in 1773 found no roads in the Highlands apart from the Military Roads build in the wake of the Jacobite rebellions. There were however the long-established drovers' routes by which Highland cattle were driven to the towns and the south. 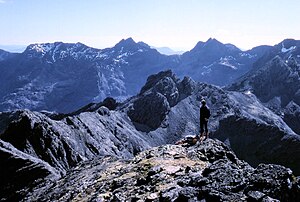 The main ridge of the Cuillin

The Highlands geologically lie to the north and west of the Highland Boundary Fault, which runs from Arran to Stonehaven. This part of the land is largely composed of ancient rocks from the Cambrian and Precambrian periods which were uplifted during the later Caledonian Orogeny. Smaller formations of Lewisian gneiss (named from the Isle of Lewis) in the north-west are up to 3,000 million years old. The overlying rocks of the Torridonian sandstone form mountains in the Torridon Hills such as Liathach and Beinn Eighe in Wester Ross.

These foundations are interspersed with many igneous intrusions of a more recent age, the remnants of which have formed mountain massifs such as the Cairngorms and the Cuillin of Skye.

A significant exception to the above are the fossil-bearing beds of Old Red Sandstones found principally along the Moray Firth coast and partially down the Highland Boundary Fault. The Jurassic beds found in isolated locations on Skye and Applecross reflect the complex underlying geology. They are the original source of much North Sea oil. The Great Glen is a transform fault which divides the Grampian Mountains to the south-east from the Northwest Highlands.[14][15]

The entire region was covered by ice sheets during the Pleistocene ice ages, save perhaps for a few nunataks. The complex geomorphology includes incised valleys and lochs carved by the action of mountain streams and ice, and a topography of irregularly distributed mountains whose summits have similar heights above sea-level, but whose bases depend upon the amount of denudation to which the plateau has been subjected in various places.