Cairn Gorm or Cairngorm is a mountain on the border of Banffshire and Inverness-shire, in the Highlands. Cairn Gorm overlooks Strathspey and the town of Aviemore. At 4,084 feet, it is the sixth-highest mountain in the United Kingdom.

Cairn Gorm has given its name to the whole range, the Cairngorms, known in the local Gaelic as Am Monadh Ruadh (the Red Hills). Cairn Gorm is the most prominent of the Cairngorm mountains in the view from Speyside, but it is not the highest: Ben Macdhui, three miles to the south, Britain's second mountain, overtops it by 210 feet.

The name Cairn Gorm is from Gaelic, and means "Blue (or Green) Cairn".

Much of the north-western slopes of the mountain are downhill skiing developments concentrated in Coire Cas. As well as ski tows, snow fences and bulldozed tracks, this corrie now also bears a funicular railway.

The next corrie south of Coire Cas, Coire an t-Sneachda, is separated from the skiing area by a ridge known as Fiacaill a' Choire Chais. The southern side of Cairn Gorm overlooks the remote loch known as Loch Avon (pronounced Loch A'an). From Loch Avon issues the River Avon, which follows Glen Avon and, lower down, Strathavon, to the River Spey far beyond. The Avon begins in a burn just above the loch.

On the other side of the loch and its glen, Ben Macdhui rises up, the highest mountain in both Banffshire and Aberdeenshire, and bested only by Ben Nevis in the whole of the British Isles.

An automated weather station (AWS) stands by the summit of the mountain, controlled by Heriot Watt University.[1] providing temperature and wind speed data. There is a separate AWS run by the Met Office.

An easy route to the summit is the access road up the centre of Coire Cas, however this route is unpleasantly scarred and is not recommended as an ascent route during the skiing season. The Windy Ridge path on Sròn an Aonaich lying to the northeast of the skiing area avoids these problems. Alternatively, Fiacaill a' Choire Chais offers a good walking route. Many other possibilities present themselves. Walkers are advised to consult the local map and call in at the Ranger Base at the car park.

There are many climbing routes at the head of Coire an t-Sneachda and Coire an Lochain, and in winter this corrie is one of Britain's major ice climbing areas.

It is possible to follow paths from the summit of Cairn Gorm to that of Ben Macdhui, curving round the head of the glen in which Loch Avon lies. The path follows the top of high and possibly unstable scree slopes and can be treacherous in the weather which often prevails on the top of Cairn Gorm.

On 21–22 November 1971, five pupils from Ainslie Park High School in Edinburgh and a trainee instructor from Newcastle-under-Lyme died in a blizzard at Feith Buidhe on the Cairn Gorm plateau.[2] As of 2012, it stands as Britain's worst mountaineering disaster. 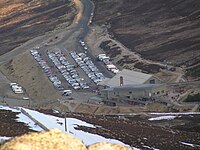 The ski resort was developed on Cairn Gorm from 1960 onwards. It is the second largest in Britain (after Glenshee) and acquired a reputation for the most reliable snow conditions. By the 1980s, thousands of skiers were using the resort on busy weekends, and the slopes could become very crowded. There was pressure to expand the resort to the west, but this was blocked by environmental objections.

A series of milder winters than in previous decades commenced in the mid 1990s, a trend usually attributed to Global Warming, and skiing conditions suffered badly. Usage fell significantly, threatening the financial viability of the resort. 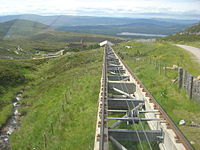 By 1990, much of the resort's original infrastructure was ageing and proving increasingly difficult to maintain. The chairlifts and tows were also susceptible to the high winds which the mountain is prone to, and were frequently forced to shut in winds above 25 mph. The Cairngorm Chairlift Company, who operated the resort, proposed removing the chairlift and replacing it with a funicular railway

There was strong opposition to the funicular from environmental groups, who were concerned about damage to the mountain and its fragile soils and plants. The eventual compromise reached, after negotiations with Scottish Natural Heritage, allowed the Cairngorm Mountain Railway to be built, but with restrictions on its usage. Only skiers are allowed to exit from the top station. Other users can visit the restaurant and visitor centre, but are prevented from leaving the building to walk to the summit of the mountain. 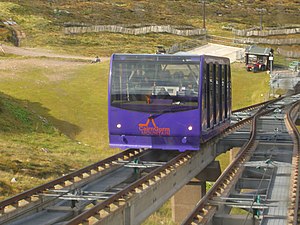 Further controversy mired the building project, with budget over-runs, allegations of conflicts of interest by those connected to both the local council and the construction company and questions raised about the use of public money. The construction was estimated to have cost around £19.6 million, mostly funded by Highlands and Islands Enterprise.

Improved snow conditions in recent winters has increased its use by skiers, Cairngorm Mountain Ltd but it is dependent on other users. Recent good snow conditions helped the company record a profit of £736,031 for the year ending 31 March 2010.