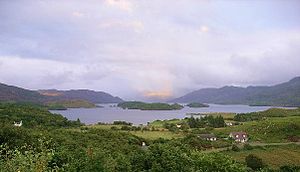 The western end of Loch Morar

Loch Morar is a freshwater loch in the Morar region of Inverness-shire. It is the fifth-largest loch by surface area in the Highlands, at 10.3 square miles, and the deepest freshwater body in the British Isles, with a maximum depth of 1,017 feet,[1][2] and this for a loch whose surface is just 30 feet above sea level.

The loch was created by glacial action around 10,000 years ago. 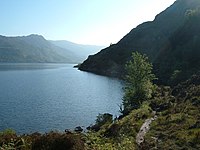 The steep banks at east of the loch

The loch at its maximum depth is unparalleled amongst British lakes, descending to 1,017 feet, so that its bottom below the United Kingdom Continental Shelf. Until 1943, when a depth of 1,062 feet was observed in the Sound of Raasay, Loch Morar was believed to be the deepest water in the United Kingdom.[4][5] The surface of the loch is just 30 feet above sea level.[6]

The water of the loch is clear and oligotrophic, with a minimal intake of nutrients, for which reason it is denoted a Site of Special Scientific Interest.[7][8] The main inflow is the River Meoble at the southern end, which drains from Loch Beoraid, although there are three other major inflows at the eastern end of the loch and a stream draining a complex of lochans to the north-west of Loch Morar.[7]

The outflow is the River Morar at the western end, which at a few hundred yards long is one of the shortest rivers in the British Isles.[7][9] At the shallower eastern end of the loch, there are a number of sizeable forested islands. 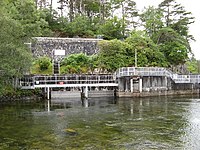 The hydroelectric power station on the loch

Swordland Lodge, on the northern shore of the loch, was used as training school STS 23b during the Second World War by the Special Operations Executive.[10][11] A 750 kW hydroelectric power station with a hydraulic head of 18 feet was built on the River Morar in 1948.[12][13]

At the western end of the loch is the village of Morar, which is between Arisaig and Mallaig on the coastal A830 road. The hamlets of Bracorina and Bracara are located along the northern shore of the loch, but there is no road along the southern shore. Tarbet, on the shore of Loch Nevis, is a short distance from Loch Morar.

During the period of the Highland Clearances, many residents emigrated to Canada.[14] Boats left in 1790,[14] 1802,[15] and 1826,[16] carrying people to Quebec, Glengarry in Ontario, and the Strait of Canso in Nova Scotia respectively.

The eastern end of the loch

Loch Morar is located entirely within the Morar Group of sediments, which were deposited in the latter part of the Cambrian, and subsequently subjected to many phases of deformation.[17]

The loch occupies a basin produced by the overdeepening of the valley by glacial erosion, along an east-west fault line.[18][19] It is not a sea loch due to isostatic rebound that raised the rock sill at the end of the loch.[20]

Based on estimates of erosion of between 2.0000 s (0.0000 s) a year, the deep basin was created over a period of 67,000 – 150,000 years of glacial action, which occurred intermittently during the last million years of the Quaternary glaciation.[18] An outwash fan made up of sand and gravels at the western end of the loch marks the limit of the re-advance in the Morar valley.[21] Subsequently colonised by vegetation and known as Mointeach Mhòr (the mossy plain), these deposits blocked the outflow of the loch to the south, so that it drained from the north-west corner instead.[22]

Loch Morar’s drainage basin is 65 square miles, and the geology is base-poor.[7][23] A site to the north of the loch was selected in 2011 as a SSSI for its characteristic rock exposures of the Moine group by the Geological Conservation Review, replacing the area around Mallaig harbour, which had been previously regarded as the most representative site.[17][24]

The loch is surrounded by a mix of natural woodland, open hillside, sheep and cattle pasture and planted mixed coniferous and broadleaf woodlands.[25] Only around 0.7% of the surface of the loch can be colonised by plants.[7]

Loch Morar's fish population is believed to be limited to Atlantic Salmon, brown trout and sea trout, Arctic char, eel, stickleback, and minnow.[7][26] Trout average around ¾ lb in size, but ferox trout of up to 15 lb have been caught.[27] The loch is also known to contain eels, although none were caught in a recent survey of eel populations in Lochaber, suggesting that they prefer the loch to the tributaries surveyed.[28] Catches of salmon and sea trout declined dramatically between the 1970s and 1980s, in common with other catchments on the west coast.[29] Artificial stocking of the River Morar with salmon and sea trout was suspended in 2007 after the hatchery was closed.[8]

The main salmonid spawning grounds are the River Meoble and the smaller burns that feed into the loch.[8] The hydroelectric power station, which contain one of only two fish counters in Lochaber, is shut down during the smolt run, following a study on smolt mortality in 1992.[8][7]

The catchment is managed by the Morar District Salmon Fishery Sub-board, which employs a full-time fisheries manager.[8] Poaching in the form of netting has been known to occur at the mouth of the River Morar.[8]

In common with Loch Ness, occasional reports of large unidentified creatures in the loch's waters are made. The monster has been dubbed Morag.[30][31]