Aviemore is a town and tourist resort in a detached part of Morayshire, locally situate in Inverness-shire. The town stands on the north bank of the River Spey, within the Cairngorms National Park in the Highlands.

The town is popular for skiing and other winter sports, and as a base for hill-walking in the Cairngorm Mountains to the east and the Monadhliath Mountains to the west. The Aviemore stone circle is found within a residential neighbourhood of the town. 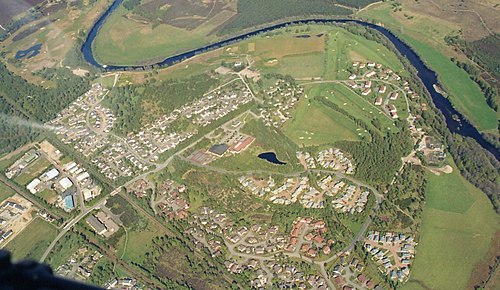 Aviemore lies on the Spey, high on the river before it opens into Strathspey. It is on the B9152 (the "old" A9 road since the main road from Inverness to Perth was rebuilt further west in the 1980s). Aviemore railway station is on the Highland Main Line and Aviemore is also the southern terminus of the Strathspey Railway, a heritage railway.

The Cairngorms are the major presence rising to the south of the town across the river and beyond, while at the back of Aviemore the hills rise to become the Monadhliath Mountains. The mountains are the very reason for the town's existence. In the summer they are mountains for rugged walkers and climbers; there are 18 munros in the Cairngorms alone, and many other hills of less height but equal beauty. The Monadhliath Mountains have four munros.

The mountain behind Aviemore itself is Carn Dearg Mòr; a modest 2,336 feet high.

In the winter, when snow is available, Aviemore becomes a ski resort. From here one may go out to the Cairngorms where there are a number of ski lifts up the mountains giving a variety of pistes, and ski lift passes are sold in town.

The village was once a mere hamlet but began to grow as a result of its becoming a railway junction in 1898,[1] following which the Highland Railway became a major employer, constructing housing for its staff and the Aviemore Hotel.

Aviemore became one of the first skiing resorts to be established in Scotland with the opening of the chairlift in 1961[2] and is also notable for being near the freely grazing reindeer herd at Glen More, the only one in the United Kingdom.[3]The resort has since grown into Britain's most visited ski resort during the winter months.[4]

The Aviemore Hotel was destroyed by fire in 1950, and its site and that of its Golf course were used in the 1960s for the construction of the Aviemore Centre. It was opened by Lady Fraser of Allander in 1966, (widow of Sir Hugh Fraser - House of Fraser). [5]"The Centre", as it became affectionately known, quickly developed into a major Scottish tourist destination, and in its heyday royalty were regular visitors, including Prince Charles and Princess Anne who attended Royal Hunt Balls hosted in the Aviemore Centre's Osprey Rooms. The very popular BBC TV show "It's A Christmas Knockout" was held in the complex twice in the 1970s.

In around 1998 many of the original John Poulson buildings were demolished as part of a promised £50 million overhaul. Although the visitor buildings were replaced, many of the other leisure facilities were not. In 2006 a privately-led tourist organisation began a programme of attracting tourists to the area.[6]Aviemore Centre now consists of a publicly accessible swimming pool with flume, health spa, 4 hotels and a 4 restaurants including Giovanni's Italian restaurant. 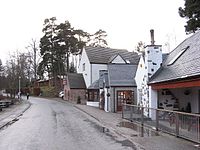 Aviemore contains a wide selection of pubs and clubs. With the Cairngorm Brewery[7] situated inside the town, most pubs offer a selection of the beers including "Sheepshaggers Gold" and "Tradewinds". The Cairngorm Hotel, which sits in the centre of the town has a selection of beers and whiskies. Aviemore now has two nightclubs, The Vault and the new "Two Hoots" nightclub recently opened as an extension from The Winking Owl Hotel.