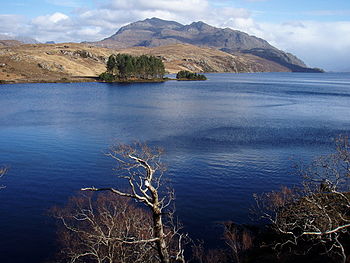 Loch Maree is a large loch among the mountainous landscape of Wester Ross, within Ross-shire. At 12 miles long and with a maximum width of 2½ miles, it is the fourth largest freshwater loch in Scotland, and the largest north of the Great Glen. Its surface area is 7,067 acres.

Loch Maree is often referred to as the most beautiful loch in the Highlands, which is no mean boast.

Its name in the local variant of Gaelic is Loch Ma-ruibhe. It used to be known as "Loch Ewe", and gave a name to the village of Kinlochewe.

Loch Maree contains five large wooded islands and over 25 smaller ones, many of which have their own lakelets. Isle Maree has the remains of a chapel, graveyard, holy well, and holy tree on it, believed to be the 8th century hermitage of Saint Máel Ruba (d. 722), who founded the monastery of Applecross in 672. The same island also contains ancient stands of oak and holly which wild fancy ties to legends of more ancient days. The waters of the loch were also thought to have curative effects, with being submerged in the water thought to be a cure for lunacy.

All of the loch's islands are conservation areas. The largest is the only island in Great Britain to contain a loch that itself contains an island.

Like Loch Ness, Loch Maree has its own lake monster in legend, the muc-sheilch. The

Because of its remote location there is little industry and tourism surrounding Loch Maree, despite being near to the sea. Early on, it became a popular spot for trout fishing after Queen Victoria visited the Loch Maree Hotel at Talladale in 1877,[1] a visit which also led to the naming of 'Victoria Falls', an attractive waterfall feeding the loch from Beinn Eighe on its south side.

Loch Maree is of international importance for its special wildlife and biodiversity. Until recently, thousands of adult sea trout (Seagoing Brown trout Salmo trutta) and salmon (Salmo salar) returned to the loch from the sea every summer. Sea trout gathered in huge numbers in certain bays, providing some of the most exciting angling in Scotland for which the loch had an international reputation. A British record sea trout of 19.5 lb was caught on a 'dapping fly' in the loch in 1952. The sea trout fishery collapsed in the 1990s and has yet to recover fully.

The loch also has two separate populations of Arctic charr (Salvelinus alpinus) about which little is known. One form of charr, with a big eye which feeds on the bottom in deep water matures at less than six inches. The other form grows to over 32 inches and can sometimes be seen in shoals ruffling the surface when the loch is calm.

Loch Maree was designated a Ramsar site in 1994. 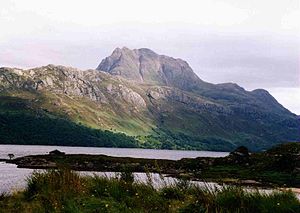 Slioch seen from the shores of Loch Maree

The loch is bounded to the east by Slioch, a mountain over 3,000 feet high, and which dominates its surroundings. It is composed mainly of Torridonian sandstone of Precambrian age. It is a popular for hill walking, scrambling and climbing. The main peak to the west is Beinn Eighe, a Torridonian mountain capped with quartzite.

Button-box accordionist, Fergie MacDonald topped the Scottish pop charts in 1966 with the tune "Loch Maree Islands" which pays tribute to the views of the Loch, and vocal versions have been recorded by many artists over the years, notably Calum Kennedy.

In the 2009-10 series of the BBC's Natural World, Episode 6, Highland Haven, stayed closer to home than usual, with a year-long look at the environment and wildlife of the UK's oldest National Nature Reserve, Beinn Eighe, along the southern shores of Loch Maree.[3]