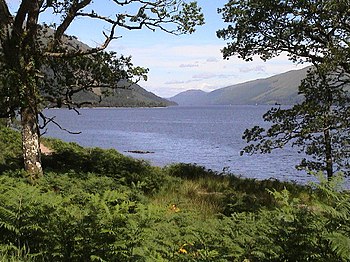 Loch Lochy from the A82

Loch Lochy is a large freshwater loch in the Great Glen which slices though the midst of Inverness-shire. With a mean depth of 230 ft, it is the third-deepest loch of Scotland.

The loch is known in Gaelic as Loch Lochaidh.

Lying in the Great Glen, 10 miles south-west of Loch Ness, Loch Lochy is over 10 miles long with an average width of about three-quarters of a mile. The River Lochy flows from its south-western end while the Caledonian Canal links its north-eastern extent to Loch Oich.

The Battle of the Shirts was fought at its northern end near Laggan in July 1544, between Clan Donald and Clan Fraser.[1]

The Stand-off at the Fords of Arkaig in September 1665 ended a 360-year feud between the Camerons and the Chattan Confederation. It took place at Achnacarry, on the isthmus between Loch Lochy and Loch Arkaig.

Folklore tales mention 'a supernatural being' called the River Horse which was said to emerge from the lake and assume a horse's shape before feeding on the loch's banks.[2] The River Horse was also known as the Lord Of The Lake and the Water King and would overturn boats and 'entice mares from their pastures'.[2] Another tradition was that of the River Bull, 'a gentle, harmless creature', who would 'emerge from the lake into the pasture of cows'.[2] 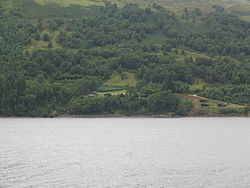 View over Loch Lochy towards Kilfinnan