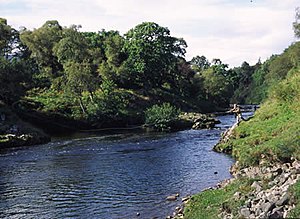 Fly fishing on the River Carron

The River Carron is a river in Ross-shire, in Wester Ross, flowing from the heart of the shire south-westwards to Loch Carron, a long sea-loch on the west coast. It is one of two rivers of that name in the county: the other, in Easter Ross, flows eastwards to the Kyle of Sutherland.

The Carron rises in several wee burns in the Ledgowan Forest. It gathers its head-streams through Carron Bog, then enters Loch Scaven and flows out from there.

From Achnashellach the river meanders 12 miles south-west through the broad strath of Glen Carron and expands at one part into Loch Doule.

About 2½ miles further south-west, the river enters the Inner Sound at the head of Loch Carron near Achintee.

The A890 road and a branch of the Highland railway, which extends to Kyle of Lochalsh, runs along part of the river's south-eastern shore.

Stocking of juvenile Atlantic salmon into the River Carron has brought this fish back from the brink of local extinction. Having made a dramatic recovery, the salmon has contributed to an improvement in the biodiversity of the whole area with kingfishers now established locally, as well as increased numbers of ospreys visiting.[1]