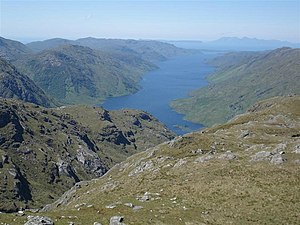 Morar is a natural district in south-western Inverness-shire; a large and mountainous area on the county's western coast. It s bounded by to the north by Loch Nevis and to the south by the Sound of Arisaig. The Arisaig peninsula is a natural part of Morar though distinct in its southwest corner.

Morar is also the name of a village on the coast of Morar, on the sheltered if highly tidal bay formed by mouth of the River Morar.

In the midst of Morar is a freshwater loch, Loch Morar; the deepest freshwater loch in the British Isles. The River Morar flows out of the loch the short distance to the sea. The loch divides the district into two areas: North Morar and South Morar.

This is a mountainous land, with three munros on its western edges:

The name is pronounced: "mawrer" with stress on first syllable; the name is Gaelic in which language the name is written Mòrar.

The land north of Loch Morar, North Morar is narrow, but important as the port village of Mallaig stands on its western shore, a ferry port from Skye. The A830 reaches north along the coast to Mallaig by no road manages to cross the mountainous length of North Morar, and even the loch shore road fades out after a few miles.

South Morar is barely kinder than North Morar. It is broader, and the A830 from Mallaig to Ardisaig does successfully break out along the south of the area, heading for Glenfinnan and Fort William.

The Battle of Morar was a clan battle fought in 1602, between the Clan MacDonald of Glengarry and the Clan Mackenzie.

During Second World War many houses in the area were used as training schools by the Special Operations Executive.[1] The Land, Sea and Islands Centre[2] in Arisaig has a display on the connection between SOE and the area and has published a book on the subject.[3]

Morar village is a small place on the west coast of Inverness-shire, within Morar three miles south of Mallaig where the River Morar reaches the sea, and placed therefore in the narrow gap between the river's estuary and Loch Morar behind.

The village has a railway station on the West Highland Line and is on the A830, part of the Road to the Isles, between Fort William and Mallaig. The village is famous for Morar Beach, known as the "White Sands of Morar", which featured prominently in the film Local Hero, as well as in Breaking the Waves.

Morar was a favourite winter travel destination of the noted British composer, Sir Arnold Bax (1883–1953), during the 1930s. He worked on his Third Symphony and each subsequent symphony during his visits to the Station Hotel there.