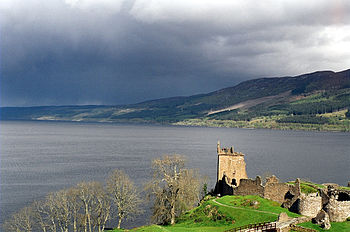 Loch Ness (Gaelic: Loch Nis) is a large, deep, freshwater loch in the Great Glen in the middle of Inverness-shire. It lies amongst the Highlands, with dramatic mountain slopes rising from its banks alternating with green meadows. It is the longest and deepest freshwater loch in the British Isles, and the most capacious in Great Britain.

The loch is a ribbon of water which stretches for approximately 23 miles southwest of Inverness. Its surface is 52 feet above sea level. Loch Ness is best known for alleged sightings of the "Loch Ness Monster", a mythical beast said to dwell in its waters, and affectionately known as "Nessie". The loch is connected at the southern end by the River Oich and a section of the Caledonian Canal to Loch Oich. At the northern end there is the Bona Narrows which opens out into Loch Dochfour, which feeds the River Ness and a further section of canal to Inverness. It is murky lake; its water visibility is exceptionally low due to a high peat content in the surrounding soil.

Loch Ness is the largest Highland loch by surface area after Loch Lomond, but due to its great depth, it is the largest by volume. Its surface area is 22 square miles. Its deepest point is 126 fathoms,[1] deeper than the height of London's BT Tower and deeper than any other loch except Loch Morar. It contains more fresh water than all the lakes in England and Wales combined, and is the largest body of water in the Great Glen, the great gash which runs from Inverness in the northeast to Fort William in the southwest.

At Drumnadrochit is "The Loch Ness Centre and Exhibition"[2] which examines the natural history and legend of Loch Ness. Boat cruises operate from various locations on the loch shore, giving visitors the chance to look for the "Loch Ness Monster".

Urquhart Castle is located on the Western shore, a mile east of Drumnadrochit.

Loch Ness is said to be the home of the Loch Ness Monster (also known as "Nessie"), reputedly a large unknown animal. It is similar to other supposed lake monsters reported elsewhere, though its description varies from one account to the next. The monster appears in the Life of St Columba; the saint is said to have calmed a great beast in the loch. Popular interest and belief in the animal's existence has varied since it was first brought to the world's attention in 1933. 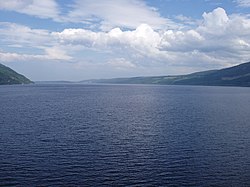 The only island on Loch Ness is Cherry Island, visible at its south-western end, near Fort Augustus. It is a crannog, which is a form of artificial island.[3] Most crannogs were constructed during the Iron Age.

There was once a second island, named Dog Island, which was submerged when the water level was raised during the construction of the Caledonian Canal.[3]

Loch Ness serves as the lower storage reservoir for the Foyers pumped-storage hydroelectric scheme, which was the first of its kind in United Kingdom. The turbines were originally used to provide power for a nearby aluminium smelting plant, but now electricity is generated and supplied to the National Grid. Another scheme, the 100 MW Glendoe Hydro Scheme near Fort Augustus, began generation in June 2009 producing 76 GWh in its first months of operation.

Loch Ness lies along the Great Glen Fault, a massive geological which forms a line of weakness in the rocks, and these have been excavated by glacial erosion, forming the Great Glen wherein lie the basins of Loch Lochy, Loch Oich and Loch Ness.

John Cobb lost his life in an attempt at the Water speed record when his boat Crusader struck a wake on the surface of the loch in 1952.

On 31 August 1974, David Scott Munro, of Ross-shire Caberfeidh Water Ski Club, became the first person in the world to water ski (mono ski) the length of Loch Ness. From Lochend to Fort Augustus and back, he covered the 48 miles in 77 minutes at an average speed of 37 mph.[4]

Brenda Sherratt was the first person to swim 22 miles along the length of Loch Ness, in 31 hours and 27 minutes in July 1966.