From Wikishire
(Redirected from Glen Spean)
Jump to: navigation, search 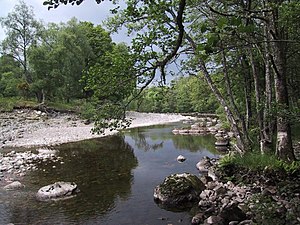 The Spean by Tulloch Farm

The River Spean is a long Highland river, in Inverness-shire, to the south of the Great Glen, where it carves a distinctive east-west glen; Glen Spean. After passing through a number of lochs on its course, it falls into the Great Glen and joins the River Lochy. The whole course of the river, until its final miles, is followed by the A86 road, which runs up the glen on its way towards Strathspey. The East Highland Way long-distance route also follows the river for a good deal of its course.

The River Pattack runs off the Ardverikie Forest and drops down through a series of waterfalls, notably the Falls of Pattack, to Glen Spean. It is the main feeder stream for Loch Laggan, which it enters at Kinloch Laggan. 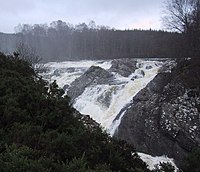 From below the dam, the river has a more liberated course in a generally eastward direction, swallowing the River Treig at Tulloch Station and the Allt Làire a few hundred yards below it. Below this point is a stretch of the glen known as "the Braes of Lochaber", where the river courses through a craggier valley: it is a little below the station that it tumbles over the Inverlair Falls.

At Roybridge, the first village of any size by the river, the Spean receives the waters of the River Roy.

At Spean Bridge the A82 crosses the river. Just below the village was the site of a Royal Marines commando training school during the Second World War, from which trainees underwent rigorous testing in the woods and in and over the river. A monument stands close to the river today. An older bridge, after which Spean bridge was named, was the Highbridge a mile downstream, which collapsed in the early twentieth century.

A mile below Spean Bridge, the river turns north-west in the Great Glen and after a few miles enters the River Lochy at Gairlochy.