Liathach is a mountain in Ross-shire; the most famous of the Torridon Hills and rightly so for its height, 3,461 feet at the highest summit, its grandeur of bearing and the challenges it places before any man who dares its slopes.

Liathach is a long mountain, its craggy slopes stretching from Loch Torridon eastwards all to the north of Glen Torridon (and the A896). It has two peaks of Munro status:

The name Liathach is Gaelic, and means 'The grey one'.

Liathach conveys an aura of impregnability when seen from the roadside below, as the slopes appear to rise up in a series of near vertical rocky terraces.

The mountain is composed of Torridonian sandstone which forms massive near-horizontal strata. They form the numerous terraces that are obvious from afar. The rocks are mainly red and chocolate sandstones, arkoses, flagstones and shales with coarse conglomerates locally at the base. Some of the materials of these rocks were derived from the underlying Lewisian gneiss, upon the uneven surface of which they rest, but the bulk of the material was obtained from rocks that are nowhere now exposed. Upon this ancient denuded land surface the Torridonian strata rest horizontally or with gentle inclination.

Some of the peaks of Torridon, such as Beinn Eighe, are capped with white quartzite, giving them a distinctive appearance when seen from afar. Some of the quartzite contains fossilized worm burrows and is known as pipe rock. It is circa 500 million years old. The Torridon landscape is itself highly denuded by glacial and alluvial action, and represents the remnants of an ancient peneplain.

There are few obvious routes up or down Liathach. Routes to each of the two Munro summits exist, following the course of two small burns to give a steep ascent or descent from the ridge. The western end of Liathach, beyond Mullach an Rathain, drops more gently to sea level than any of the burns.

The traverse of the hill including both of the above peaks is a challenging expedition; the intervening ridge is for the most part a series of rocky pinnacles known as Am Fasarinen (The Teeth), which reach a height of 3,041 feet at the western end and is considered a Munro "top". A head for heights is needed to cross these obstacles, which provide an exhilarating scramble for the experienced hillwalker or mountaineer.

There are few places on the ridge for descent, so once committed, the walker has little choice but to complete the entire ridge walk. The pinnacles can however be avoided by means of a narrow path that traverses the ridge on the south side. This should not be regarded as an easy option however; the path is exceedingly exposed, and there is much erosion at points where it crosses any of a series of gullies. In winter the traverse of Liathach becomes an even more serious expedition, and should not be undertaken lightly.

A traverse of Liathach is comparable with that of An Teallach or the Aonach Eagach in similar conditions.

Liathach has two summits and four listed "Tops" in the Munro Tables:

Meall Dearg is a particularly awkwardly placed as it stands off the main ridge at the end of the Northern Pinnacles which run north from Mullach an Rathain. The route along the Northern Pinnacles is considered a rock climb and the other route to the top from Coire na Caime involves difficult scrambling in steep gullies. Irvine Butterfield considers Meall Dearg "The most difficult top in the British Isles challenged only by the Inaccessible Pinnacle of Sgùrr Dearg".[1][2] The Northern Pinnacles were first climbed in 1894 by Hinxman, Rennie and Douglas.[3]

Mullach an Rathain is a summit on the great bulk of Liathach. It is part of the wider mountain but considered distinct enough to be listed as a Munro in its own right. Its height is 3,356 feet. 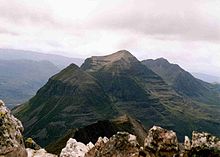