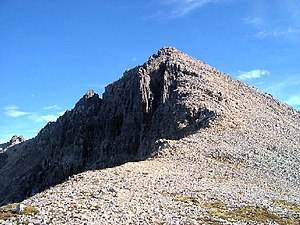 Sgurr nan Fhir Duibhe, one of the peaks of Beinn Eighe

Beinn Eighe is a complex mountain massif amongst the Torridon Hills of Ross-shire. It forms a long ridge with many spurs and summits, two of which are classified as Munros in their own right.

Unlike the neighbouring hills of Liathach and Slioch, Beinn Eighe has a cap of Cambrian basal quartzite which gives the peaks of Beinn Eighe a distinctive light colour. Its complex form of peaks, crags and ridges has made it popular with both hillwalkers and climbers, and the nature reserve on its northern side makes it an accessible mountain for all visitors.

Beinn Eighe is to be found between Loch Maree and Glen Torridon in Wester Ross. This is a complex mountain: a main ridge runs on a line extending from close to Kinlochewe in the northeast to the narrow glen of the Coire Dubh Mòr separating it from the neighbouring mountain, Liathach (another complex massif) in the south-west. The slopes into Glen Torridon on the south side are steep with few features and covered in white quartzite screes. On the north side are four large corries between which are a series of spurs extending out from the main ridge.[1]

Two of Beinn Eighe's summits are classified as Munros:

Ruadh-stac Mòr is a peak of 3,314 feet forming part of the larger mountain, Beinn Eighe, and indeed as the highest summit on that mountain it is Beinn Eighe's ultimate summit. Amongst Beinn Eighe's various summits though, two are of sufficient distinctiveness and prominence to be classified as Munros each in its own right and so Ruadh-stac Mòr may be taken on its own. Invariably, a climb of this Munro is achieved as part of a climb together with Spidean Coire nan Clach.

The name Ruadh-stac Mòr is Gaelic, and means "Big Red Stack". It is to be found on one of the spurs off the main ridge of the mountain.

Spidean Coire nan Clach is a peak of 3,258 feet forming a subsidiary top of Beinn Eighe, but one of sufficient distinctiveness and relative prominence that it is classified as Munros in its own right, along with the main summit, Ruadh-stac Mòr. Spidean Coire nan Clach is the second summit of Beinn Eighe, but the highest point on the main ridge of the mountain. Invariably, the bagging of this Munro is achieved together with Ruadh-stac Mòr in one expedition.

The name Spidean Coire nan Clach means "Peak of the Corrie of Stones". It stands apart on that ridge and commands an extensive view over both Glen Torridon and the rest of the Beinn Eighe massif.

On Beinn Eighe are many summits, in particular: 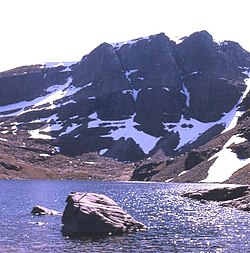 One of the most famous features of Beinn Eighe is the corrie named Coire Mhic Fearchair, often simply known as the "Triple Buttress Corrie" after the three large rock features which dominate the view from the north. There are many rock climbs on the buttresses and hillwalkers can access the tops of the buttresses from the head of the corrie.

The Triple Buttress was also the scene of an aviation tragedy. A post-war converted Lancaster, now operating in a maritime reconnaissance role by 120 Squadron, had taken off from RAF Kinloss just after 18.00 hours on the evening of 13 March 1951 for a NAVEX in the vicinity of Rockall and the Faroe Isles. The aircraft was due back at RAF Kinloss around 02.25 hours the following morning. However, while on the return journey, the aircraft experienced atrocious and freezing weather conditions, together with a strong N'Easterly wind. Some time after transmitting its last radio message, the Lancaster crashed just 15 feet below the summit of Beinn Eighe, and at the top of the almost inaccessible Far West Gulley (now known as 'Fuselage Gulley'), west of Triple Buttress and above Loch Coire Mhic Fhearchair. Unaware of the crash location, the search teams could still find no trace of the missing aircraft after two days.

At the time of the accident, a boy in Torridon had witnessed a red glow over Beinn Eighe. Believing this to be coming from one of the fishing boats on the loch, he thought nothing of it. However, two days later, on hearing about the missing aircraft, he remembered what he had seen and reported it. RAF Kinloss were notified of the boy's report together with the reports of several other witnesses who also had seen the red flash over Beinn Eighe. As a result of these reports, the RAF redirected their search efforts to the extensive ridge which included Beinn Eighe. On 16 March, an Airspeed Oxford aircraft located the crashed Lancaster on the mountain and reported its position back to the ground search teams. The rescue teams arrived at the base of the mountain on 17 March and began their attempted recovery from 18 March onward. However, because of the very difficult terrain and atrocious winter weather conditions, the teams could not reach the Lancaster, even after several attempts.

Experienced civilian mountaineers offered their services but were turned down by the RAF, which was unfortunate, as in those days RAF recovery teams were ill-trained for arduous mountain rescues or recoveries. It was as a result of this incident that the modern RAF Mountain Rescue Teams. Eventually, two Royal Marine commandos reached the crash site and located one of the bodies. A few more bodies were recovered by the end of March—two weeks after the accident. However, it was not until nearly 6 months later—on 28 August 1951—that the remaining bodies of the eight crew members were recovered from the site. Local Keepers and Ghillies also assisted using Garrons (horses) to evacuate the bodies from the mountain. This would be the start of the local Kinlochewe and Torridon Mountain Rescue Team.

Beinn Eighe is unusual amongst the Torridon mountains in that its summit is not composed of Precambrian Torridonian Sandstone, but Cambrian basal quartzite, a very hard but brittle rock. This gives it its familiar light coloured summits, a notable contrast to the other peaks in the area. Underlying the quartzite is a bed of Torridonian Sandstone.

Beinn Eighe's complex topology offers both hillwalkers and climbers a wide variety of routes, climbs and traverses. For the hillwalker a popular route is the western traverse which includes both of the Munro summits and Coire Mhic Fearchair.

A full traverse of Beinn Eighe includes navigating a series of pinnacles known as the Black Carls, which provide good scrambling and are located at the eastern end of the main ridge. Approached from the National Nature Reserve the Black Carls are a popular climb in their own right. Also within the National Nature Reserve, a moderate route ascends to the 'Conservation Cairn' at 1,837 ft (560 m) which offers extensive views of the surrounding landscape including Loch Maree and the nearby mountain Slioch.

The Beinn Eighe National Nature Reserve is managed by Scottish Natural Heritage. Declared in 1951 it was the first such area in Great Britain.[2] Scottish Natural Heritage provides a visitor centre two miles north-west of Kinlochewe, extensive marked trails through woodland on the lower slopes of Beinn Eighe, picnic areas and viewpoints. SNH also provides a field station with full laboratory facilities for up to fourteen people.[3] which is used by scientists and researchers to co-ordinate field data recording and as a base for undergraduate fieldwork.

Within its 4,800 hectares, the reserve includes open moorland, woodland and bogs, and is home to protected species including red deer, golden eagles and pine martens. Many rare plants, including two variants of dwarf shrub heath and a western variant of moss heath, are also to be found on the reserve.