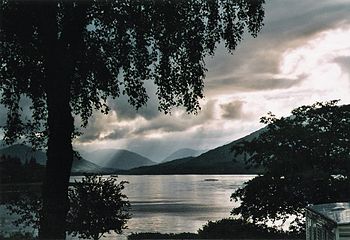 Loch Linnhe is a broad sea loch slicing into the west coast of Inverness-shire. It marks the south-western end of the Great Glen, the long, straight fault line from coast to coast through the heart of the Highlands.

The part of Loch Linnhe upstream of Corran is known in Gaelic as An Linne Dhubh (the black pool, originally known as Loch Abar), and downstream as An Linne Sheileach (the salty pool). The name Linnhe is from the Gaelic word linne, meaning "pool".[1]

Loch Linnhe follows the line of the Great Glen Fault, and is the only sea loch along the fault.[2]

About 30 miles long, it opens onto the Firth of Lorne at its south-western end. The part of the loch upstream of Corran is 10 miles long and an average of about a mile and a half wide. The southern part of the loch is wider, and its branch south-east of the island of Lismore is known as the Lynn of Lorne. Loch Eil feeds into Loch Linnhe at the latter's northernmost point, while from the east Loch Leven feeds in the loch just downstream of Corran and Loch Creran feeds into the Lynn of Lorne.

The town of Fort William lies at the north-eastern end of the loch, at the mouth of the River Lochy.