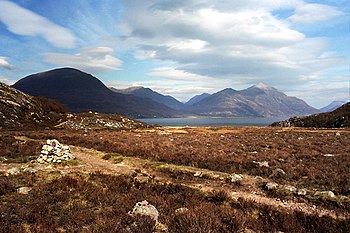 The Torridon hills, from the Shieldaig peninsula 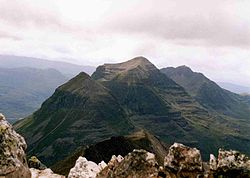 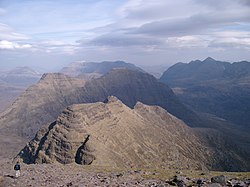 View east from Sgurr Mhòr over the "Horns" 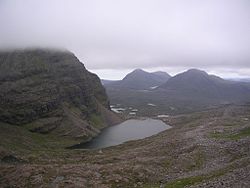 The Torridon Hills are a range of grand and dramatic mountains in western Ross-shire. They surround Torridon village, reaching inland from Upper Loch Torridon toward Loch Maree. To the southeast they tumble down in a scarp to Glen Torridon.

The name is usually applied to the mountains to the north of Glen Torridon. They are among the most dramatic and spectacular peaks in the British Isles and made of some of the oldest rocks in the world. Many are over 3,000 feet high, so are considered Munros.

The Torridon Hills are mainly made of a type of sandstone, known as Torridonian sandstone, which over time has become eroded to produce the unique characteristics of the Torridon Hills. In geology, Torridonian describes a series of proterozoic arenaceous sedimentary rocks of Precambrian age. They are amongst the oldest rocks in Britain, and sit on yet older rocks, Lewisian gneiss.

Some of the highest peaks, such as Beinn Eighe are crowned by white Cambrian quartzite, which gives those peaks a distinctive appearance. Some of the quartzite contains fossilized worm burrows and known as pipe rock. It is circa 500 million years old. The strata are largely horizontal, and have weathered into terraces on the mountains.

Each of the Torridon Hills sits very much apart from one another, and they are often likened to castles. They have steep terraced sides, and broken summit crests, riven into many pinnacles. There are numerous steep gullies running down the terraced sides from the peaks. The summit ridges provide excellent scrambling, and are popular with hillwalkers and mountaineers. However, like many ridge routes, there are few escape points, so once committed, the scrambler or hillwalker must complete the entire ridge before descent.

There are numerous other mountains outside the immediate area of Loch Torridon which have the same characteristics, such as An Teallach near Ullapool.

Although many peaks in the North-west highlands exhibit Torridon geology, the Torridon hills are generally considered only to be those in the Torridon Forest to the north of Glen Torridon. Specifically, these are:

Hills between Glen Torridon and Strath Carron share much of the splendour and character of the main hills, although perhaps less of the drama:

The Torridon Hills exhibit some of the most dramatic mountain scenery in the British Isles, perhaps surpassed in grandeur only by the Cuillins of Skye.

A large part of the Torridon Hills is owned by the National Trust for Scotland: