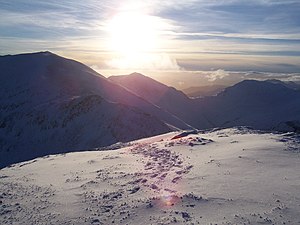 The Grampian Mountains or Grampians are one of the major mountain ranges in the Highlands. The Grampian Mountains are however undefined: some hold that the name refers to a range stretching across the eastern part of the Highlands, south of the Great Glen and the Cairngorms in Inverness-shire, Perthshire and Aberdeenshire, while others attribute the name to all the contiguous Highland ranges south of the Great Glen, to occupy therefore almost half the land area of Scotland.

However defined, the Grampians include several of the highest mountains in the British Isles.

The Roman historian Cornelius Tacitus recorded Mons Graupius as the site of the defeat of the native Caledonians by Gnaeus Julius Agricola around AD 83. The name Mons Graupius means 'the Graupian Mountain' (the origin of 'Graupian' is unknown). The actual location of this mountain is argued among historians, though most favour a location within the Grampian massif, possibly at Raedykes, Megray Hill or Kempstone Hill. The spelling Graupius comes from the Codex Aesinas, a mediæval copy of Tacitus's work believed to be from the mid-9th century.[1]

In 1476, a printed edition of Tacitus's Agricola rendered the name in error as "Mons Grampius";[2] this printing error is the source of “Grampian”. The name Grampians is believed to have first been applied to the mountain range in 1520 by the historian Hector Boece.

In the Middle Ages, this locale was known as the Mounths, a name still held by a number of geographical features and only in the 19th century did the many distinct mountain ranges in this area come to be more collectively described. The Grampian Mountains have no single name in the Scottish Gaelic language.

There no agreement about the extent of the range. In the introduction of Wyness (1968) the author, writing about Deeside, puts the northern-edge of the Grampians at the River Dee when he writes: 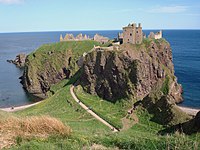 Dunnottar Castle, where the mountains reach the sea

Clearly, then, Wyness defines the Cairngorm as being the range of mountains running from immediately south of Aberdeen’ westward to Beinn Dearg in the Forest of Atholl, and including only the eastern part of the Highlands, as far as the Alder Group.

In Watson (1975) the author – while defining the extent of the Cairngorms – specifically excludes the range south of the River Dee, writing:

The other main hill group is the long chain running from Drumochter in the W almost to the sea just S of Aberdeen. Many maps and books have given its name as ‘the Grampians’ but although children have to learn this at school, they do not learn it at home and nowhere is it used in local speech. Some map-makers have confused the issue by printing ‘Grampians’ over the Cairngorms and Strath Don hills as well!
—Watson (1975) (p. 19) 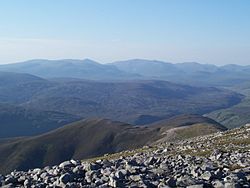 The Cairngorms from Beinn a' Ghlò

Both Wyness and Watson roughly agree where the eastern, northern, and western limits of The Cairngorms lie. They are south of the Great Glen (north of which lie the Northwest Highlands) and to the east finish as the mountains of Athol give way to the gentler lands to the coast. To the west, Wyness and Watson terminate the name "Grampians" around the Dromochter Pass, though others take them all the way to the west coast and Ben Nevis itself.

Ranges considered to belong to the Grampian Mountains include:

Using wider definitions, they may include:

Of the three highest mountains of the British Isles, Ben Nevis (4,409 feet) is in the Nevis Range, and Ben Macdhui (4,294 feet) and Briarach (4,252 feet) in the Cairngorms. Of the more narrow definition of the Grampian Mountains, as the western highlands, is Ben Lawers, which stands at 3,983 feet.

The area is generally sparsely populated, habitation limited to farmsteads and isolated villages in the glens, with some larger villages in the mountain passes or holiday resorts.

The mountains are composed of granite, gneiss, marble, schists and quartzite.

A number of rivers and streams rise in the Grampians: the Tay, Cowie Water, Burn of Muchalls, Burn of Pheppie, Burn of Elsick, Cairnie Burn, Don, Dee and Esk.

View of the Grampian Mountains, 1831