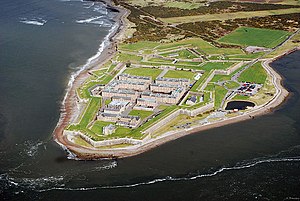 Fort George from the air

Fort George is a large 18th-century fortress near Ardersier in the very north-east of Inverness-shire. It was built to pacify the Scottish Highlands in the aftermath of the Jacobite rising of 1745, replacing a Fort George in Inverness constructed after the 1715 Jacobite rising to control the area. The current fortress has never been attacked and has remained in continuous use as a garrison.

The fortification is based on a star design; it remains virtually unaltered and nowadays is open to visitors with exhibits and facsimiles showing the fort's use at different periods, while still serving as army barracks. Originally the depot of the Seaforth Highlanders and later of the Queen's Own Highlanders (Seaforth and Camerons), it was more recently home to the Royal Irish Regiment, and as of 2007, the new garrison of the Black Watch, 3rd Battalion, Royal Regiment of Scotland.

The first Fort George was built in 1727 in Inverness; it was a large fortress capable of housing 400 troops on a hill beside the River Ness, on the site of (and incorporating portions of) the mediæval castle which had been rebuilt as a citadel by Oliver Cromwell but later abandoned. The first commanding officer of the original Fort George was Sir Robert Munro, 6th Baronet, Colonel of the 42nd Royal Highlanders (Black Watch) and chief of the Highland Clan Munro.[1]

During the 1745 rising the fort was seized by the Jacobites, who had it blown up in 1746 to prevent the Hanoverians from using it as a base.[2] In 1747 Colonel William Skinner, the King's Military Engineer for North Britain, let a contract to rebuild the fortress, but Inverness Council made a claim for compensation for the loss of part of its harbour and an alternative site was found.

The site chosen was a level spit of land at Ardersier, about 11 miles north-east of Inverness, which forms a promontory jutting into the Moray Firth and controls the sea approach to Inverness. With its own harbour below the walls, the fort could be supplied by sea in the event of a siege. Work began in 1748, with Colonel Skinner in charge, and the Adam brothers, John, Robert and later James, acting as contractors, overseeing around 1,000 soldiers who provided labour and defended the site against attack. By 1757 the main defences were in place, and Fort George was finally completed in 1769. The original budget was £92,673 19s 1d, but the final cost was more than £200,000, a vast figure at the time. There were no more Jacobite rebellions for the fort to control, and it became a base for the Highland regiments recruited from the clans in the same way as the Black Watch.

The fortifications form an example of defence in depth. The main walls are stone faced, in plan faceted and angled with projecting bastions and redoubts so that every wall face is covered by fire from guns sited on top of other walls. The walls are many yards wide and grassed over, on top of barrel vaulted casemates which form underground bunkers designed to protect the entire garrison from artillery fire. The approach to the fortress from the landward side is across a wide area of loose shingle, unsuitable for siting heavy guns, so that besieging artillery is kept out of range. Sloping grassy banks designed to absorb artillery shells all but hide the fort from view. The entrance is reached via a ravelin, a free standing defensive structure incorporating a guardhouse and completely exposed to fire from the main fort, then by a raised wooden walkway, complete with drawbridge, bridging across a wide ditch set between heavily defended bastions. The ditch forms a wide killing ground openly exposed to gunfire from these walls.

The barracks are still in use as a military establishment, but much of the site is open to the public (entrance charge).

Historic Environment Scotland use part of one of the barracks to display reconstructions of life in the early days of the fort, and the Grand Magazine displays the Seafield Collection of Arms as well as forming a stage for actors recreating the lives and stories of soldiers in the 18th century.

The former Lieutenant Governors’ House is home to the Highlanders' Museum, the official regimental museum of the Queen's Own Highlanders and Lovat Scouts. The exhibits include uniforms, weapons, medals, World War I memorial plaques known as “death pennies”, photographs, paintings, memorabilia and regimental regalia. Displays include the history of the regiments, their links to the clans, the Highland charge, Sergeant Alexander Edwards and other notable regimental members, and the regiments' activities in different conflicts.

The regimental Chapel is also open to visitors, and features many regimental colours and memorials.