Ben Lomond is a mountain in Stirlingshire, within the Highlands. It rises on the eastern shore of Loch Lomond to a height of 3,196 feet; the most southerly of the Munros.

It is a solitary and distinctive mountain. Looking south from the Arrochar Alps, Ben Lomond appears to have a conical summit but there is a craggy corrie high on its steep, northern slopes.

The mountain's name comes from the Gaelic Beinn Laomainn, meaning "Beacon Mountain". It stands within the Ben Lomond National Memorial Park and the Loch Lomond and the Trossachs National Park, and is the property of the National Trust for Scotland.

Ben Lomond is one of the most popular climbs amongst the Munros, since it is relatively easy to reach from the cities and a relatively easy climb from Rowardennan. On a clear day from the higher grounds of Glasgow it is a visible, luring presence and likewise across the Central Lowlands, which may have led to it being named "Beacon Mountain". Ben Lomond summit can also be seen from Ben Nevis, the highest peak in the British Isles, over 70 miles away. 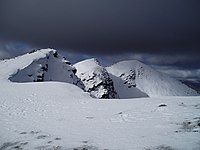 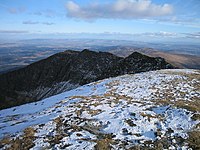 The mountain comprises two parallel south-south-easterly ridges: the Sròn Aonaich ridge to the east and the Ptarmigan ridge to the west. North of the summit these ridges come together and lead to a 1,496-foot col with Cruin a' Bheinn. The summit is grassy and rocky and is marked by a trig point.

Ben Lomond's geology is dominated by granite, mica schist, diorite, porphyry and quartzite. The mountain forms part of the watershed between eastward and westward draining waters.

The West Highland Way runs along the western base of the mountain, by the loch.

The usual route up Ben Lomond is by way of the 'tourist path', a broad and now heavily eroded path which is roughly paved in steeper sections. It is a relatively unchallenging path, created in view of to the mountain's popularity.[1][2] The Tourist Path climbs the gentle Sròn Aonaich ridge, before ascending a steeper section to the rocky summit ridge.

An alternative route follows the Ptarmigan Ridge to the summit along a steeper and rockier path. The Ptarmigan Path is the second most popular route.

Despite the comparative ease of the tourist route, Ben Lomond can present a significant challenge to inexperienced walkers, especially in poor weather conditions.[3] A dedicated Lomond Mountain Rescue Team has existed since 1967 to assist walkers and climbers on Ben Lomond other surrounding peaks.[4]

The higher regions of the mountain support an alpine tundra ecozone, hosting bird species including peregrine falcon, merlins, rock ptarmigan, red grouse and golden eagles.[5] A study by the British Trust for Ornithology found that Ben Lomond may host the most southerly breeding ptarmigan population in Scotland,[6] following the decline of these populations on Goatfell and the Arran mountains.

In addition to natural wildlife, the mountain area supports sheep farming activities. The National Trust for Scotland is tasked with maintaining a land management programme which sustains a balance of natural habitat conservation and the availability of land for grazing.[2]

Since 1995,[2] the area around Ben Lomond, including the mountain summit, has been designated as a war memorial, called the Ben Lomond National Memorial Park. The park is dedicated to those who gave their lives in the First and Second World Wars and was created out of the former Rowardennan Estate with the support of the National Heritage Memorial Fund.[7]

The Memorial Park was officially opened on Armistice Day in 1997 and there was unveiled in the pristine wilderness a large granite sculpture.

At the time of its creation, management of the Memorial Park was entrusted to the National Trust for Scotland, the Forestry Commission and the Scottish Office.[7]

Ben Lomond's popularity has resulted in several namesakes in British colonies, in Australia, New Zealand, Trinidad and the United States. The mountain is mentioned in the popular folk song The Bonnie Banks o' Loch Lomond.