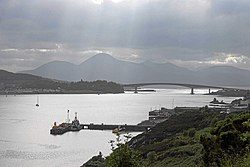 The Kyle (narrows) of Loch Alsh and the Skye Bridge

Loch Alsh is a sea inlet between the Isle of Skye in Inverness-shire and Lochalsh in Ross-shire. The name is also used to described the surrounding country and the feudal holdings around the loch. The area is rich in history, and is increasingly popular with tourists. The name comes from the Scottish Gaelic Loch Aillse, "foaming lake"[1]

The hilly country around Loch Alsh has a temperate, well-watered climate. There is some pasture and woodland, but much of the area is moorland. The rocks are ancient Precambrian Gneiss, some of the oldest in the world, much eroded. 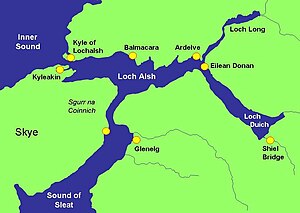 The loch runs inland about 7½ miles from Kyle of Lochalsh to Ardelve. From there Loch Duich continues southeast another six miles to Shiel Bridge while Loch Long runs deeper into the mountains to the northeast. A narrow strait from the south of Loch Alsh leads to the Sound of Sleat that separates the Isle of Skye from the mainland. The loch is overlooked by Sgurr na Coinnich, which rises to 2,424 feet on Skye. The mainland hills to the north reach 1,483 feet at the summit of Auchtertyre Hill and 1,129 feet on Sgurr Mor but are generally lower and slope gradually down to the west.[2]

Much of the countryside is moorland or pasture but there are lowland areas of deciduous forest with native birchwoods and oakwoods and some conifer plantations.[3] At one time the forest would have been more extensive, but the early inhabitants converted parts of it to crofts (small farms) and when the Highland Clearances destroyed the crofts the land was kept as pasture.[4]

The loch witnessed the last invasion of Britain by Spanish forces in 1719.[5] 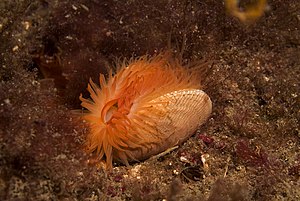 A Flame shell taken in Scotland

In 2012, a large colony of flame shells were discovered in the loch following a Marine Scotland commissioned survey, carried out by Heriot-Watt University. The reef is thought to consist of over 100 million flame shells covering 185 acres, making it the largest known reef of its kind in the UK.[6][7]