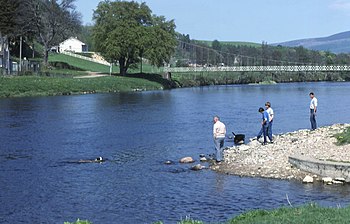 The River Spey at Aberlour

The River Spey is a river 107 miles in length which rises in the highlands of Inverness-shire (at Loch Spey; NN419937) and flows down with a swift stream, its lower reaches forming the border between Morayshire and Banffshire, and finally the Spey discharges its waters into Spey Bay in the Moray Firth.

The Spey is the longest of the Highland rivers after the River Tay and the fastest-flowing river in Britain. The Spey is rich in salmon and all sorts of wildlife, and its fame for salmon fishing is widespread. Its waters also feed whisky production.

The origins of its name are unclear though 'hawthorn river' has been suggested (from a word linked to the British language 'yspyddad'. It has also been suggested as a pre-Celtic word reconstructed as 'squeas' reckoned to mean vomit or gush. Ptolemy named the river on his map of c AD 150 as Tuesis. The name 'Spey' first appears in 1451.[1]

In Gaelic it is known as Uisge Spè. 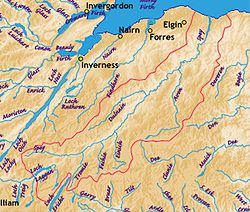 The River Spey and its tributaries

The Spey is 107 miles long. It rises at over 1,000 feet at Loch Spey in the Corrieyairack Forest in Inverness-shire, 10 miles south of Fort Augustus. The river descends through Newtonmore and Kingussie, crossing Loch Insh before reaching Aviemore.

Below Aviemore is Strathspey; the broadening valley of the river. From there it flows the remaining 60 miles northeast to the Moray Firth, reaching the sea in Spey Bay, five miles west of Buckie.

On some sections of its course, the Spey changes course frequently, either gradually as a result of deposition and erosion from normal flow, or in a matter of hours as a result of flood|spate. The Spey spates quickly due to its wide mountainous catchment area as a result of rainfall or snow-melt.

Insh Marshes, areas of roughly two miles on either side of the Spey in the lower reaches are designated by Scottish Natural Heritage as a Site of Special Scientific Interest, as are the extensive shingle systems at Spey Bay.

After leaving Loch Spey the river gathers numerous burns in the Corrieyarack, Sherramore and Glenshirra Forests. The first sizeable tributary is the Markie Burn which drops out of Glen Markie to the north to enter the waters of Spey impounded behind the Spey Dam. A further mile downstream the River Mashie enters from Strath Mashie to the south.

The River Truim enters on the right bank a couple of miles above Newtonmore and the Calder enters from Glen Banchor on the left bank at Spey Bridge at Newtonmore. At Kingussie the Spey is joined on its left bank by the Allt Mor which runs through the town and a mile and a half downstream it is joined by the River Tromie which enters on the right bank.

The sizeable River Feshie joins on the right bank at Kincraig and the River Druie does likewise at Aviemore.

Several miles downstream the River Nethy joins from the east near Nethy Bridge and the River Dulnain originating in the Monadhliath contributes a considerable flow from the west near Dulnain Bridge.

The river traditionally supported many local industries, from the salmon fishing industry to shipbuilding. At one stage, Garmouth functioned as the shipbuilding capital of the United Kingdom, with timber from the forests around Aviemore and Aberlour rafted down to build wooden-hulled ships.

Speyside distilleries produce more whisky than any other region.

Speyside and the countryside river

The river is known by anglers for the quality of its salmon and trout fishing, including a particular form of fly fishing where the angler uses a double-handed fly rod to throw a 'Spey cast' whereby the fly and the line do not travel behind the fisher (thereby keeping these away from the bushes and trees lining the banks behind him or her). This type of cast was developed on the Spey.

The Speyside Way, a long-distance footpath, follows the river through some of Morayshire's most beautiful scenery.

The River Spey is unusual in that its speed increases as it flows closer to the sea, due to a broadly convex long-profile. The mean flow is around 52 feet per second, making it the fastest flowing river in the United Kingdom (depending on what constitutes a river).

The Spey does not meander, although it rapidly moves its banks. South of Fochabers a high earth barrier reinforces the banks, but the river has broken through on several occasions, removing a large portion of Garmouth Golf Course, sections of wall surrounding Gordon Castle, parts of the Speyside Way and some of the B9104 road. 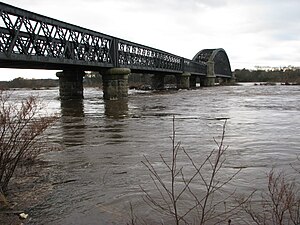 The Spey railway bridge now carried the footpath from Spey Bay to Garmouth. It was originally designed with its main span over the main flow of the river, however before construction was completed the river had changed its course and was running at one end of the bridge.

From source to sea, the towns and villages along the Spey include: