South Uist is an island of Inverness-shire in the Outer Hebrides. At low tide South Uist forms one long island with the isles to the north, North Uist and between them Benbecula and Grimsay, and these are all now joined by causeways. At the south, Eriskay is joined to it by a new-built causeway.

There is a nature reserve on South Uist and a number of sites of archaeological interest, including the only location in Great Britain where prehistoric mummies have been found.

In the 2001 census the island had a usually resident population of 1,818. In contrast to the staunchly Presbyterian islands to the north, the population of South Uist is about 70% Roman Catholic, and it is perhaps the rivalry which led to the erection of a giant statue (or idol as the North Uist folk would say) of "Our Lady of the Isles" on South Uist to greet visitors from the north. The island, in common with the rest of the Hebrides, is one of the last remaining strongholds of the Gaelic language in Scotland, and the inhabitants of this isle are known as "Deasaich" (Southerners).

In 2006 South Uist, and neighbouring Benbecula and Eriskay were involved in Britain's biggest community land buyout to date to acquire the estate of the island.

In the northwest of South Uist there is a missile testing range.

The west of the island is machair, a fertile low-lying coastal plain, with a continuous sandy beach. The east coast in contrast is mountainous with the peaks of Beinn Mhòr 2,034 feet and Hecla 1,988 feet. The west is deeply cut by long sea lochs in the nature of Norwegian fjords or Cornish creeks.

The main village on the island is Lochboisdale (Loch Baghasdail), from which ferries sail to Oban on the mainland and to Castlebay on Barra. The island is also linked to Eriskay and Benbecula by causeways. The causeways lead on to Grimsay and North Uist. Smaller settlements include Daliburgh (Dalabrog), Howmore (Tobha Mòr) and Ludag.

South Uist has a bedrock of Lewisian Gneiss, high grade regional metamorphism dating back to 2900 million years ago in the Archaean. Some show granulite facies metamorphism, but most are the slightly lower temperature amphibolite facies. These formed part of the Earth’s deep ancient crust, left here when the North Atlantic was formed. These are the oldest rocks in the British Isles today and they have been brought to the surface by tectonic movements. They now bear the scars of the last glaciation which has exposed them.

"South Uist Machair" on the west coast is one of 40 National Scenic Areas in Scotland.[1]

After the Norse occupation, South Uist was held by the MacDonalds of Clanranald until 1838 when Colonel Gordon of Cluny bought the island and initiated Highland Clearances to make way for sheep farming, supplanting the crofters with farmers from the Middle Shires, who brought Blackface sheep flocks. The population of South Uist fell from a total of 5093 in 1841 to its present level of 2285. As a result there was large scale emigration from the island.[2]

The island is one of the last surviving strongholds of the Gaelic language and the crofting industries of peat cutting and seaweed gathering are still an important part of everyday life.

The Flag of South Uist

Tourism is important to the island's economy and attractions include the Kildonan Museum housing the sixteenth century Clanranald Stone and the ruins of the house where Flora MacDonald was born.

On South Uist is the Askernish Golf Course.[3] The oldest course in the Outer Hebrides, Askernish was according to some designed by Old Tom Morris, the famed maker of golf courses who also worked on the Old Course at St. Andrews. The Askernish course existed intact until the 1930s, but was partly destroyed to make way for a runway, abandoned, and ultimately lost. Its identity remained hidden for many years before its apparent discovery, though the claims for it and Old Tom's involvement are disputed by many locals.[4][5][6]

Restoration of the course to Morris's original design was held up by disagreements with local crofters,[7][8] but after legal challenges were resolved in the courts, the course opened in August 2008.

After a protracted campaign South Uist residents took control of the island on 30 November 2006 in Scotland's biggest community land buyout to date. The previous landowners, a sporting syndicate, sold the assets of the 92,000 acre estate for £4.5 million[9] to a Community Company known as Stòras Uibhist which was set up to purchase the land and to manage it in perpetuity.[10][11] The buyout resulted in most of South Uist, and neighbouring Benbecula, and all of Eriskay coming under community control.[12]

The proposal for community ownership has received the overwhelming support of the people of the islands who look forward to participating in the opportunity to regenerate the local economy, to reverse decline and depopulation, to reduce dependency while remaining aware of the environmental needs, culture and history of the islands. The company name Stòras Uibhist symbolises hope for the future wealth and prosperity of the islands.

In 2017, Stòras Uibhist took a leading role in having the island flag, which had been flown unofficially for many years, approved by the Lord Lyon and registered by the Flag Institute.[13]

In the north west of the island a missile testing range was built in 1957-58 to launch the Corporal missile, Britain and America's first guided nuclear weapon. This development went ahead despite significant protests, some locals expressing concern that the Gaelic language would not survive the influx of English-speaking army personnel. The British Government claimed that there was an 'overriding national interest' in establishing a training range for their newly purchased Corporal, a weapon that was to be at the front line of Cold War defence. The Corporal missile was tested from 1959 to 1963, before giving way to Sergeant and Lance tactical nuclear missiles. The 'rocket range' as it is known locally has also been used to test high altitude research rockets, Skua and Petrel.

The range is still owned by the Ministry of Defence and operated by QinetiQ as a testing facility for missile systems such as the surface-to-air Rapier missile and Unmanned Air Vehicles.

In 2009 the MOD announced that is was considering running down its missile testing ranges in the Western Isles,[14] and now it is s the islanders, whose fathers opposed it, who bewail its loss for the potentially serious consequences withdrawal would have for the local economy. 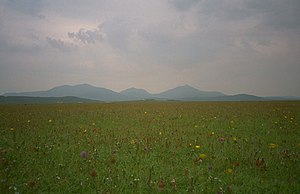 Loch Druidibeg in the north of the island is a National Nature Reserve owned and managed by Scottish Natural Heritage. The reserve covers 4,144 acres of machair, bog, freshwater lochs, estuary, heather moorland and hill.[15] Over 200 species of flowering plants have been recorded on the reserve, some of which are nationally scarce. South Uist is considered the best place in the UK for the aquatic plant Slender Naiad (Najas flexilis)[16] which is a European Protected Species.

Nationally important populations of breeding waders are also present, including redshank, dunlin, lapwing and ringed plover. The reserve is also home to greylag geese on the loch and in summer corncrakes on the machair. Otters and hen harriers are also seen.

There has been considerable controversy over hedgehogs on South Uist. The animals are not native to the islands, having been introduced in the 1970s to reduce garden pests. It is claimed they pose a threat to the eggs of ground nesting wading birds on the island. In 2003 the Uist Wader Project - headed by Scottish Natural Heritage - began a cull of hedgehogs in the area. Following a campaign and concerns over animal welfare, this cull was called off in 2007, instead hedgehogs are being captured and translocated to mainland Great Britain.[17][18] [19] 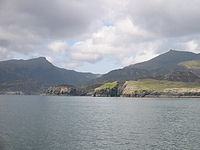 To Nicolson's Leap with Beinn Mhòr (L) and Hecla (R) beyond

The Sheffield Environmental and Archaeological Research Campaign in the Hebrides has been developing on South Uist a long-term perspective on changes in settlement and house form from the Bronze Age to the 19th century. Organisation within Iron Age roundhouses appears to have been very different from 19th century blackhouses in which the dwelling was shared with stock.[20]

The archaeological site of Cladh Hallan, the only site in Great Britain where prehistoric mummies have been found, is on South Uist.[21]